Last year, 12% of Super Bowl viewers used the Internet while watching the game according to data from Nielsen. Those that used the web spent an average of 24 minutes online during the game. It would not be at all surprising if those numbers increased significnatly this year.

"Nielsen found that simultaneous users were most engaged in general interest, e-mail, and online social networks," the firm says. "Sports sites, which might be more directly associated with the game itself, were visited by 18% of simultaneous users." 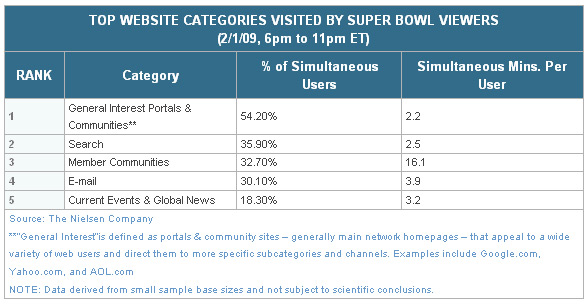 According to Nielsen, about a quarter of simultaneous users spent time during the game using Facebook at an average of 15 minutes. Google and Yahoo Mail also received significant use during game time.

> GoDaddy Back in the News for Super Bowl Ads