Super Bowl XLV promised to be the ‘Social Bowl’ of advertising with commercials predicted to be more ingrained in social media than ever before.  Starting with early nods to Pepsi Max and Doritos whose Crash the Super Bowl contest put six ads, all created and voted on by consumers, in the Sunday line-up.  As well as Bud Light, who gave a sneak peek of its ads to fans including the ability to unlock an online ad living exclusively on their Facebook page.

According to Advertising Age, two-thirds of viewers ages 18-34 would be using a smartphone during the game, putting overall buzz and social sharing at an all-time high.  And while that was most certainly true (just check out your News Feed) there was still something slightly disappointing about the execution in linking traditional and social marketing.  Only a mere eight companies even promoted their social networks on their end-card and despite the rise in QR codes, they were absolutely non-existent.  Having said that, there are a few examples to learn from in successfully tying together traditional and social marketing for an experience that goes beyond the 30-second television spot.

This year, Audi became the first to incorporate a hashtag in a Superbowl commercial (even if its placement felt like an afterthought) by including it in a hilarious ad about breaking out of ‘old luxury’ to promote the Audi Progressive Luxury Trade-up contest on Twitter.  Over 700 #ProgressIs hashtags were submitted between the time the first commercial aired until the end of the Super Bowl.

Followers enter the contest by completing the phrase, #ProgressIs in 140 characters or less to become one of the top 10 finalists chosen by Audi. However, the most interesting social marketing strategy about this campaign is what happens AFTER the Superbowl as the 10 finalists compete to win the grand prize.  Audi plans to keep the buzz going by testing each the finalists’ ability to promote their campaign.  Audi will give each finalist an image of an old school luxury item, many which appeared in the commercial, along with a hashtag and reward points based on social sharing.

Points are earned by measuring the spread of the finalist-created social assets around the contest including blog posts, YouTube videos, Twitpic photos and retweets on Twitter.  The grand prize winner will receive a $25,000 donation made to the charity of their choice along with a trip for two to an Audi Sportscar Experience in Sonoma, California to test drive the new Audi R8.  While the execution of the commercial hashtag and the context around it could have been much better, it’s extremely creative to leverage these finalists to future promote Audi’s new branding of progressive luxury well after Super Bowl Sunday.

Opting out of the $3 million big game ads, Ford decided to sponsor the pre-game show to promote Focus Rally America, the ultimate interactive road rally.  The television spots featured six pairs participating in the race with a strong call to action for viewers to join their team.

After teaming up, viewers can participate in challenges to help their team’s twosome solve clues and puzzles in real-time on their way to the $100,000 grand prize and a new 2010 Ford Focus.  They can also vote for fun surprises along the way, like making a team member wear a chicken suit or awarding their team room service.  So what’s in it for them?  By assisting the teams, viewers can earn points for themselves and increase their chance of being asked to participate in a challenge with their team and even, to win their very own 2010 Ford Focus.

Mercedes Benz had a similar road rally promotion called Tweet Race involving a race to Dallas, where the Super Bowl was held, fueling the vehicles completely by tweets.  Extremely innovative, the campaign helped grow Mercedes’ social networks tremendously.  However, more momentum could have been created if the race was promoted during the Super Bowl and perhaps occurred after the week after.

Lipton Brisk was probably the only commercial asking viewers to visit their Facebook channel to see more.  Expanding on its Brisk Stories campaign, Brisk enrolled Eminem to tell us why he doesn’t do commercials, joining similar ads with stories by Ozzy Osborne and Danny Trejo. On their Facebook channel, you can view the Eminem ad, see past videos and share your own story according to their weekly theme to win an Xbox 360.  All the stories show up in a comment thread on the customized tab and allow you to share your entry to Facebook and Twitter.  Although slightly overshadowed by Eminem’s appearance in the Chrysler ‘Imported from Detroit’ ad, Brisk did the best job at pushing viewers to its social network. 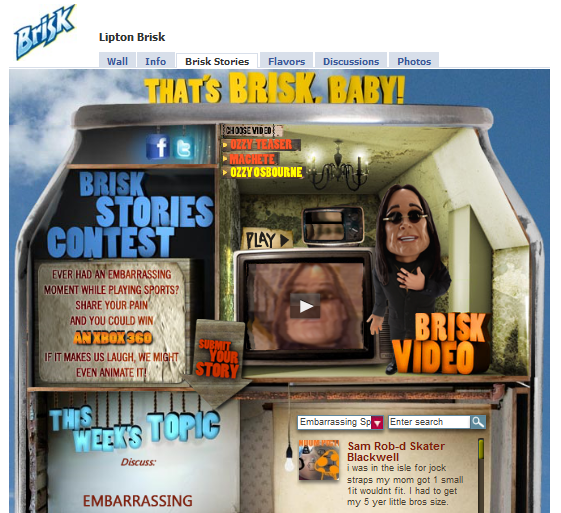 Volkswagen decided to leak their Darth Vader ad titled ‘The Force’ for the 2010 Passat earlier this week before it even officially aired for the Super Bowl.  The idea paid off and the ad went viral, gaining about 12 million views by Sunday.  By allowing momentum to build, the Volkswagen commercial became the most talked about ad on Twitter, beloved by fans and followers well before the kick-off.

Rumored to release a secret code unlocking a level in the addictive and popular game, Angry Birds, the new animated film, Rio, did just that. Cleverly hidden in the movie preview, the code appears at the end of commercial and is said to also let users enter a sweepstakes for a trip to Rio de Janeiro on March 22 for the film’s premiere. Can you find it? (Hint: It’s right around the 00:27 second mark!)  This is a great example of an exclusive for fans and how it can spread socially.

Overall, the Super Bowl generated great buzz and quite a few good commercials.  Going into next year, I predict to see integration with QR codes,  more ad leaks on social properties and integration into real-time campaigns.  Perhaps Groupon will release an exclusive deal on game-day or Old Spice have Isaiah Mustafa do commercials reminiscent his video messages directed at the opposing teams.  Maybe Chrysler will even inspire the Detroit’s revival.  If a pop superstar can mess up the national anthem, anything is possible, right?