It was only four short years ago that StumbleUpon was the biggest driver of social media traffic to websites. Look at this chart from StatCounter we shared in January, 2011. 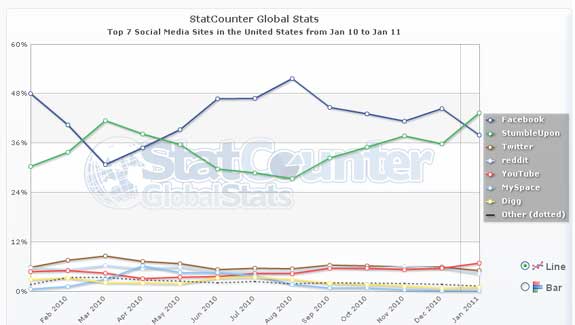 Was StumbleUpon a big traffic driver for your site back then? Have things changed? Let us know in the comments.

A lot has changed in the social media landscape since then. For one thing, Pinterest didn’t crack the top ten social networking services until December of that year. Now, it’s number two for social media traffic referrals, while Facebook has completely run away with the top spot. These days, StumbleUpon sits at a respectable number four, based on data from Shareaholic (Pinterest is at a comfortable number 2), but out of the eight social networks Shareaholic tracks, only Facebook and StumbleUpon saw growth in referrals in Q4.

StumbleUpon referrals are back on the rise after previously heading in the opposite direction, and this is likely due to various efforts by the company, including email and social media strategy, a new blogger program, and a change made to the functionality of the submit button for websites. We discussed all of this here.

But will websites continue to be able to get their content in front of the StumbleUpon audience and reap the traffic benefits? As you may or may not know, StumbleUpon made its first acquisition in 2013 when it bought video discovery platform 5by. It seems that much of the company’s focus has been on this service, which essentially works like a StumbleUpon for video. Last year, 5by gained Chromecast support, opening the service up to all of those who’ve bought Google’s super-cheap streaming device. 5by, which works great as a discovery service, does not rely on user-submitted content like StumbleUpon, however. Instead, it’s based on algorithms and an internal team of curators.

We asked StumbleUpon CEO Mark Bartels if the long-term goal is to continue these separate methods for content selection or whether we’ll see both services follow similar models. It would appear that the latter is the plan, but instead of of StumbleUpon adopting the 5by approach, it’s likely that we’ll see 5by adopt the StumbleUpon approach.

In other words, 5by will only get more StumbleUpon-like. StumbleUpon users shouldn’t worry about StumbleUpon becoming more 5by-like when it comes to submitted content. StumbleUpon has no plans to move away from user submissions.

“Quite the opposite,” Bartels says. “The highest quality content is typically user submitted. The new iOS build now allows uses to submit from Safari. [The] majority of stumbles are now on mobile so giving users [the] ability to submit directly from their mobile browsers or via a badge is [a] great tool. The ingestion engine quickly eliminates duplicates, spam and low quality content. Doing this fast and reliably is key to scaling.”

The downloadable StumbleUpon toolbar for web browsers used to be a major part of the StumbleUpon experience. These days, it doesn’t seem to be the subject of a whole lot of focus from the company. For example, a while back, StumbleUpon made some changes to the submission experience from the “Submit” button, which sites (like the one you’re on) display on their content. In the past, users would select categories and tags for the content, but now StumbleUpon dictates this categorization on its own. If you submit with the toolbar, however, you still get the old experience.

Asked if the bar is still being used much, Bartels says, “It still has a lot of power users, but the team resources & growth is on mobile and Web Toolbar. Publishers and brands have made huge leaps in creating mobile optimized stories that load quickly and is user friendly.”

“Publishers’ natives pages are rendering beautifully within the apps and mobile web. We improve the discovery experience with lightning quick recommendations and pubs get the traffic kick,” he adds, noting that people do underestimate how big and solid the desktop market is.

“A lot people spend ~8 hours a day in front of a PC,” he says. “Our strongest days on SU are always weekends and Mondays.”

Publishers looking for increased exposure of their content through StumbleUpon shouldn’t be afraid of submitting their own stuff. Just make sure it’s good content.

Bartels tells us, “We want to make the guidance clear and friendly to bloggers and businesses promoting quality content on SU. A strong SU community includes giving publishers and bloggers the ability to submit quality stories and not be penalized for self promotion. Ingestion and curation of quality stories is just as important as the discovery and sharing.”

Just don’t go overboard. Make sure you remember the part about quality. And by all means, share good stuff from other sources too.

Do you submit your own content to StumbleUpon? Let us know in the comments.