You really know your iPhone app is rejected when Steve Jobs personally emails you in response to an appeal made regarding app store approval. Tawkon, the name of both the app and developer can be added to the list of app drama which has taken place this week.

The radiation monitoring app is available on Blackberry, Android, and now jail-broken Apple devices. Tawkon has gone underground, and is now available on the Cydia store.

Upon its release, Tawkon was rejected from the app store. This led to discussions with Apple execs, eventually leading to an email correspondence with Steve Jobs.

Not to mince words, here’s the email Tawkon posted on their blog…

The reaction to Tawkon’s exclusion from the app store has led to a wide variety of opinions. Ranging from “Apple needs to stop deciding what I can and cannot download” to John Brownlee of CultofMac.com, who states “Tawkon’s launching on Cydia instead, which is fine, but I’m with Steve on this one: given that the iPhone has no native radiation-detecting mechanism (and therefore isn’t accurate), combined with the fact that there is no medical basis for fearing cellphone radiation exposure and the heightened fears about radiation both domestically and abroad, this just isn’t an app that needs to be on the App Store.”

Brownlee provides an interesting point, as Tawkon doesn’t directly monitor radiation. However, Tawkon explains how their app works with this YouTube video:

The argument between radiation exposure in cell phones has been going back and forth for as long as the devices have been available. One group points to research to validate their claims, while the other group has their research as well. Unfortunately, there’s no long term research available to validate or refute either claim. CNet has a great report, providing information about what we do know concerning cell phone radiation.

Though they’ve been rejected, Tawkon isn’t giving up on the fight. They have a petition posted on the front page of their site, which let’s people email Apple to let them know they want the app. 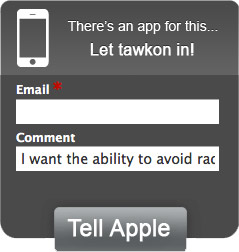 Depending how you feel in regards to cell phone radiation will more than likely determine your stance in the Tawkon app dilemma. Was Jobs and Apple justified in turning down Tawkon, or does the developer have a valid monitoring app?

Whatever your opinion, there’s no denying the humor of Job’s short and to the point email response.