Apple wants to centralize its campus and focus more on landscaping. That’s the message that came out of Steve Jobs’ presentation to the Cupertino City Council Tuesday evening. They propose to do this by building a massive office building that would expand the capacity of their centralized campus by over 400%.

Apple’s original office park, according to Jobs, only houses around 2,600 to 2,800 people. But they’ve got “almost 12,000 people in the area.” So what have they been doing? Renting out buildings in areas that aren’t always adjacent to the original campus.

Apple recently bought up about 150 acres in Cupertino that was once owned by Hewlett Packard. This is where Jobs is proposing that they build the new complex. In his presentation, Jobs said that the land is “kind of special to me,” citing the fact that Bill Hewett was one of his idols when he was 13. 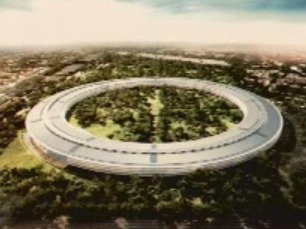 Jobs proposes the new Apple headquarters as one big building, housing 12,000 people. It looks awesome, to be quite honest. It’s one giant ring, with curved glass windows and tons of space in the middle for landscaping. It resembles either a spaceship or a giant metal donut. Either way, housing that many people in one centralized campus will be quite the achievement.

Here’s what Jobs says about the new building:

It’s a circle, so it’s curved all the way around, and if you’ve built something, you know it’s not the cheapest way to build something. There’s not a straight piece of glass on this building, and we’ve used our experience making retail buildings, and we know how to make the biggest pieces of glass in the world, for architectural use – and we want to make the glass specifically for this building here. We can make it curved all the way around the building. It’s pretty cool.

Today, about 20% of the space is landscaping, most of it is big asphalt parking lots. We want to completely change this and make 80% of it landscaping. And the way we’re going to do this – we’re going to put most of the parking underground. And you can see what we have in mind. Today there are 37-hundred trees on the property, we’d like to almost double that.

Also, here’s the entire video of the presentation, complete with council-member questions at the end. They seem enthusiastic about the venture. The slides of the proposed campus start around the 5 minute mark:

Musings On The Cloud, Platforms And Developers

The Backdoor To iOS 5?