The Spotify fairy has taken it upon herself to leave an invite to her little music service under my pillow, so I feel it is my obligation to see if it lives up to all the hype. At very first glance (less than an hour messing around with it), those Europeans aren’t smitten for nothing.

After using my code to register for the service (I have the premium level) and filling out my username and password, I was prompted to download the Spotify desktop client. This is where the magic happens. Upon opening the client, you are greeted with a home page that both shows you “What’s New” (today that happens to be Britney Spears’ Femme Fatale) and “Top Lists” which is exactly what it sounds like – top albums and top tracks. 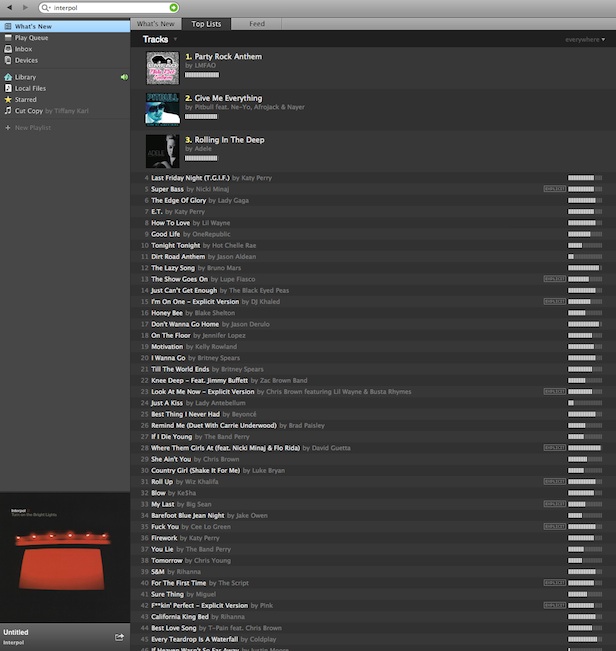 Of course, I’m not on my home computer, but if I was Spotify would prompt me to import all of my personal music to store in my library. This would include all my files from iTunes, WMP, Winamp, whatever you use to currently keep tracking of all your digital files.

This is one thing in which Spotify seems to want to promote – social sharing. Once connected to Facebook, all of my friends that have also connected via Facebook appeared in a collapsible column called “People” on the right side of the screen. As of now, I only have one Facebook friend that has done this, but I can use her to tell you what this entails.

The “people” on Spotify are your own personal music buddies. When you click on their “profile,” Spotify shows you their top artists, top songs, and any publicly published playlists that they have created. From their page you can listen to any song as well as subscribe to their created playlists.

And once you are connected to Facebook (and Twitter), Spotify makes it easy to share your playlists and currently-listened-to tracks with your social media accounts. On the bottom left corner of the client, where your “now playing” track is located, there is a little button that opens up a sharing center. From there you can post your now-playing track for your Facebook and Twitter followers to see – 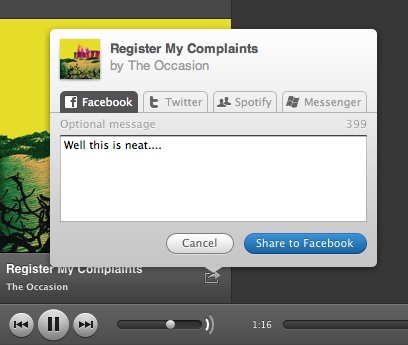 The star of Spotify, though, is the music – and it doesn’t disappoint. The search feature allows you to quickly find any song, artist or album for immediate playback and/or starring. Starring a song or album will put it directly into your library.

Unlike last.fm or Pandora, this isn’t picking a band or song and then hearing a radio channel based around that choice. This is searching for a song and playing it, in its entirety, right then and there. With the premium version, this will never change. With the free version there are some stipulations after about 6 months. Read more about those here. 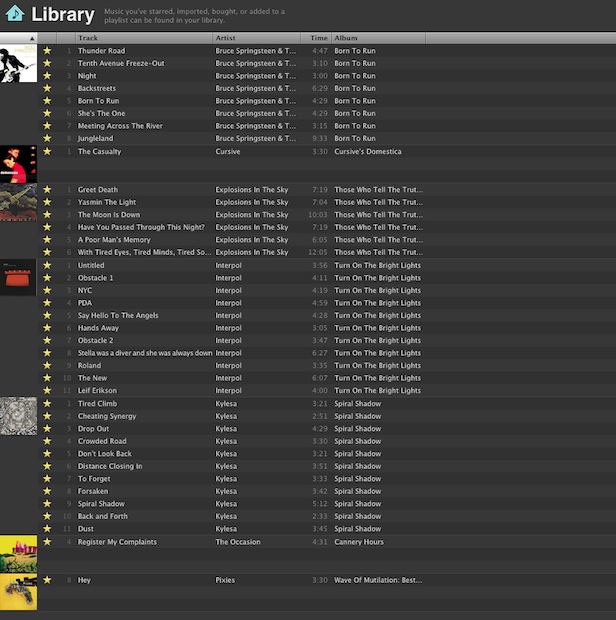 Under the “other devices” tab, you are prompted with the graphic below. If Spotify will sync all your mp3s for you and import all your mp3s from your computer, is there truly a need for iTunes anymore (unless you use it a you music store)? 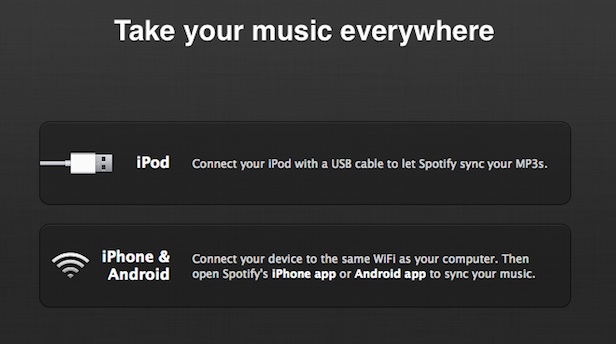 Of course, this isn’t a comprehensive review, I just got the thing. But I can say that it is quite impressive. The user interface is clean, sleek and simple. It sure does remind me a lot of iTunes, except instead of a music store with 30 second clips I can just listen to the whole song. And store it in my library.

Of course Grooveshark is an obvious competitor to Spotify, but from what I can tell Spotify’s library is more extensive. And as CNET points out, “while Grooveshark has its fans, their music catalog is limited and its user-uploaded music approach could prevent the kind of direct label relationships Spotify benefits from. The company has also had their mobile app yanked from the iOS catalog, which for many users is a deal-breaker.”

Some early musical omissions that I’ve found – The Beatles, Arcade Fire, half of Sufjan Steven’s catalog. And of course there will be other music missing from Spotify. But with the massive amount of music that it does provide for free, paired with the social aspect and easy, sleek interface, Spotify seems to be a more than solid service as it makes its American debut.