Symantec has released its June 2010 MessageLabs Intelligence Report, which looks at the recent increase in scams containing FIFA World Cup-related messages. The World Cup is being used to target unsuspecting users, and that is expected to increase as the event goes on.

Brazil appears to be in the lead when it comes to focus of targeted attacks. Targeted malware emails are being aimed at Brazilian companies, including those in the chemical, manufacturing and finance sectors. Attacks use dual attack modes – a PDF attachment and a malicious link to bypass traditional security measures.

Symantec says spam for a pharmaceutical site with the World Cup as a headline used obfuscated JavaScript within the attachment which contains code to redirect the recipient’s browser to a different and disguised location. 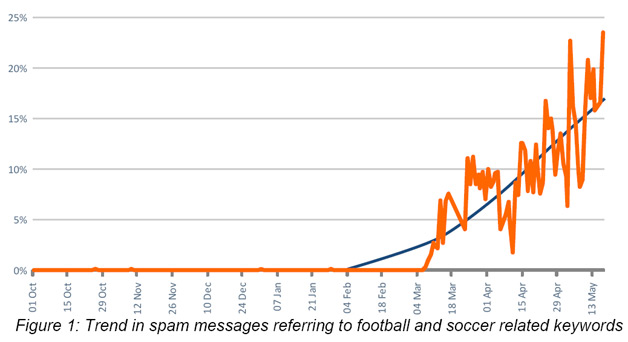 Some other highlights from the report include:

– Viruses – One in 276.4 emails in June contained malware (a decrease of 0.11 percentage points since May)

– Phishing – One in 634.4 emails comprised a phishing attack (a decrease of 0.26 percentage points since May)

– 30.3% of all malicious domains blocked were new in June (a decrease of 1.8 percentage points since May)

– 12.5% of all web-based malware blocked was new in June (an increase of 0.1 percentage points since May)

For more details on the targeted attacks and other findings, take a look at the report.

Salesforce Chatter Now Available to Everyone