Social web browser Flock has announced it will be shutting down on April 26, according to notice on its website.

Flock was purchased by social gaming company Zynga in January for an undisclosed amount. “The Flock team joined Zynga in January, 2011 and is now working to assist Zynga in achieving their goal of building the most fun, social games available to anyone, anytime — on any platform,” the company said on its website. 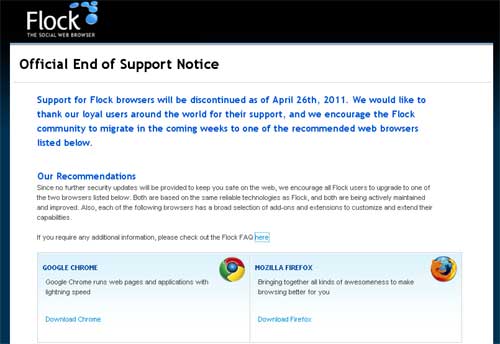 Flock said users could still use the browser but key features would be disabled after April 26. “You can keep using the product, but its sync and social networking features will no longer work after April 26, 2011, as the servers that bring you those features will be decommissioned. In addition, the browser will not have the latest security and privacy updates made available,” the company said.

Flock said it recommends users either switch to Google Chrome or Mozilla Firefox. The 5-year old browser had 10 million users globally who were attracted to Flock for it ability to help them manage social media such as Facebook, Twitter and YouTube.