The double-digit growth of social networks in the U.S. are on track to reach their peak, according to a new report from eMarketer.

eMarkter estimates nearly 150 million Internet users will be active on social networks at least monthly this year, bringing the reach of such sites to 63.7 percent of the online population. By 2013, 164.2 million Americans will use social networks, or 67% of internet users. 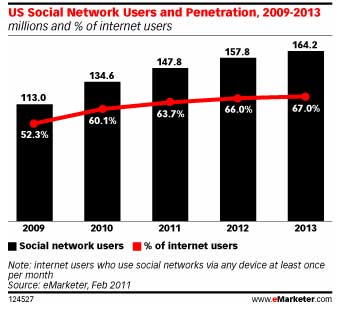 “With fewer new users signing up, social network users will be more sophisticated and discerning about the people and brands they want to engage with,” said Debra Aho Williamson, eMarketer principal analyst and author of the new report.

While the social network audience has expanded to include a large number of users from Generation X, boomer and senior demographic, the youngest age groups are still the most active.

“In 2011, social networks will need to cement their relationships with their users, particularly people ages 35 and older, in order to keep them engaged,” said Williamson.

“Marketers and media companies can contribute to this effort by creating compelling user experiences that make people want to stay connected to social networks so they can gain access to experiences, deals or content they may not be able to find anywhere else.”