Nearly two-thirds (64%) of online Americans use social media, and the majority (84%) of social media users reveal information about themselves via social platforms, according to a new poll from Harris Interactive.

Not only are many Americans sharing updates about their life (43%), what they are currently doing (36%), and places they are going (31%), many are also revealing brand, product and company preference. Specifically, about one-quarter are expressing their dissatisfaction with companies, brand or products (26%), talking about companies, brands or products they like (23%) or giving product reviews and recommendations (19%). In fact, 34 percent indicate they have used social media as an outlet to complain about a company, brand or product. 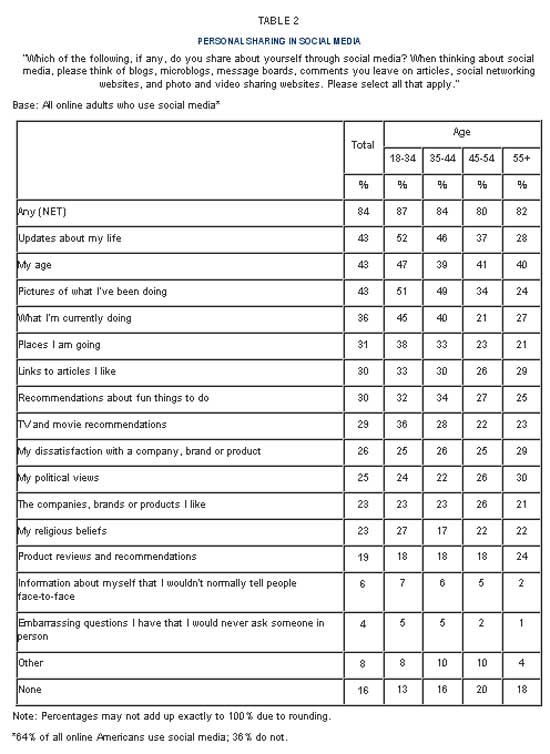 What people say online about companies, brands and products matters, according to Harris.  In fact, nearly half of Americans who use social media say reviews about a particular company, brand or product from friends or people they follow on social networking websites influence them either a great deal or a fair amount (45%) – the same number as Americans who say reviews in newspaper or magazine articles influence them (46%).

Even though people may not reveal everything, 83 percent say they know that by participating in social media, they are giving up some of their privacy.

Despite some of the differences between younger and older Americans in their use of social media, a majority of Americans (78%) agree that what they reveal about themselves on social networking sites is just a snapshot, not a complete portrait, of who they are