Due to the large population discrepancy, it probably won’t surprise anyone that China has more broadband users that the United States.  What might surprise you is just how much more active the Chinese are online, especially when it comes to engagement with social media.

An interesting study by Netpop Research entitled Social Face-Off : A Comparison of U.S. and China Social Media Use finds that people in China are more involved in every type of social media activity of which they studied.  First, some general facts about the two internet communities: of the broadband users age 13 and above, the Chinese have a much younger, more educated internet population than the U.S.  They also spend more time online per weekday. 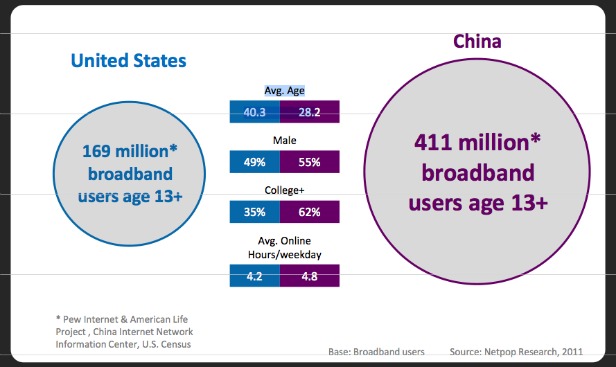 Not only is China spending more time online, but while they are online they are interacting with social media at a much greater rate than the U.S.  When Netpop measured the “contribution” percentage in each country, they found that 93% of the 411 million Chinese broadband users contribute to social media compared to only 73% of the U.S.’s 169 million broadband users.  “Contributors” are people involved in one or more activity such as posting to a social network site, posting to a blog, updating their location, uploading videos and much more.

Here’s the really interesting part – China completely dominated the U.S. in participation in every social media activity except “posting to social network sites,” which they only lead by 2%.  Americans love their Facebook, and our status-update-happy culture is the only thing that kept this statistic close, I assume. 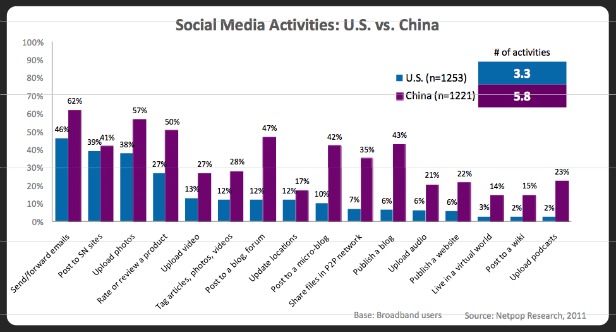 One of the major discrepancies is the amount of micro-blogging happening in each country.  Netpop points out that Twitter is the only major micro-blog in the U.S., while the Chinese regularly use sites like Fanfou, QQ Micro-blog and Souhu Micro-blog along with Twitter.  Really, the only crossover in the sites considered in this study are Facebook, Twitter, Flickr, Picasa ans YouTube.

Americans are about as likely to sign up for an emailing list, but the Chinese are much more likely to connect in other ways like becoming a fan on Facebook and following on a micro-blog – which looks to be the largest way that brands connect to the people of China. 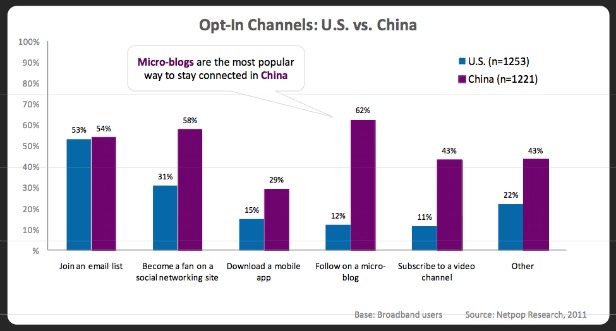 What accounts for this giant discrepancy in social media connection between the two countries?  Netpop says that more Chinese have the “go-getter” personality and that they see social media as a way to get-ahead:

The data also underscore how much larger and more active Chinese netizens are than their American counterparts. True, Chinese Internet users are younger in age, but demographics alone cannot explain such differences. Psychographics also provide clues. In the United States, we find ambition – or the desire to “get ahead” – motivating social media use in a small and discrete segment known as the “Go‐Getters.” By contrast, Go‐Getter qualities are expressed in two of the three Chinese segments. Chinese netizens, in other words, are more likely to use social networking to get‐ahead, perhaps reflecting a more eager and opportunistic outlook in general.