Snooze For Charity With This New iPhone App

Call this the digital swear jar.

Their first crack at an app to achieve this goal is called “Snooze.”

The free app for iOS functions as a basic alarm clock, but with a twist. The app allows you to set it up so that every time you hit the snooze button, you pledge 25 cents to a non-profit organization.

The app keeps track of every time you hit the snooze button and twice a month users will have the opportunity to donate the total amount to one of the non-profits in the LetGive network. This network currently consists of about 11 organizations, including the Asperger Syndrome and High Functioning Autism Association, The Nature Conservancy, Music for Tomorrow and City Harvest.

This week, I could have already given about 5 dollars. 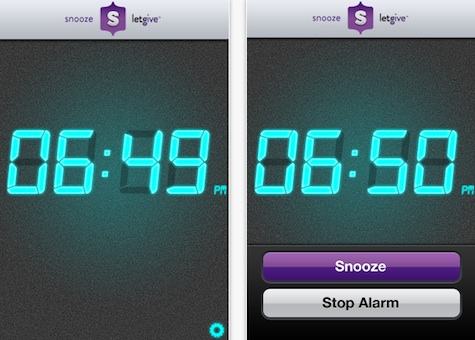 A couple of weeks ago they announced a “Hack For Good” contest on their blog. It will take place during September:

LetGive has created an API that allows anyone to include a charitable giving component within their application. Applications built on our platform are transformed into powerful fundraising vehicles for Nonprofits and Charities.

The first application built on the platform is an alarm clock that resides on your iPhone. When you hit the Snooze button, a donation is triggered to the charity of your choice.

Any type of application (game, newsreader, calendar, alarm clock, mail reader, map/location based, Twitter/Facebook client) can be turned into a giving application.

Of course, this app isn’t going to rack in gigantic sums of money for the non-profits. But every little bit counts, and apps like this can make donating to charity a more everyday, passive experience – you don’t even have to think about donating, you just do it. In the future, the expansion of this concept could lead to more apps that could rake in even larger charitable donations.

What do you think of the idea? Let us know in the comments.