People are using their smartphones as platforms for gaming at a fast growing rate, according to data published by Flurry Analytics.

In 2009, iOS game sales accounted for 19% of the portable game revenue, according to Flurry.  In 2010, once Android is factored in, over one-third of the U.S. portable game market is owned by the two operating systems.  Apple and Google, rejoice.  In total, smart device game sales grew 60% in one year while both Nintendo and PlayStation reported declining profits in the field.

The growth in the iOS and Android gaming share seems to hurt Nintendo the most, grabbing 13% of its share as opposed to just 2% of PlayStation’s share. 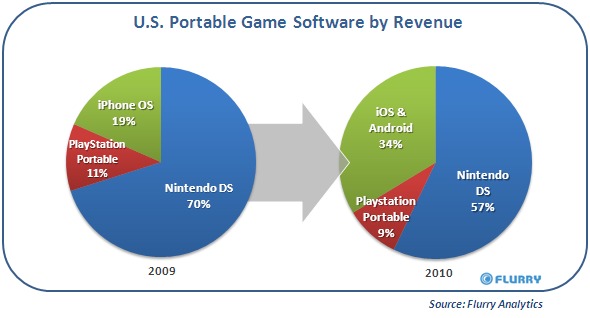 Much of this growth could be attributed to the growth of smartphones in general.  By the end of 2011, IDC projects that the smartphones market will grow almost 50%, from 303 million shipped devices to over 450 million.

The low cost of iPhone and Android games is also a huge factor.  While many popular games can be bought for just 99 cents, even the high end mobile games top out at around $10.  PlayStation Portable (PSP) and Nintendo DS carry a heftier price tag.

Wedbush Morgan Securities video game analyst, Michael Pachter, points out that the “onslaught of $1 games is going to continue” and that “[Nintendo and Sony] are going to have to share the market with Apple and Android.”  Our numbers quantify just how much.  Further, as iOS and Android continue to change the paradigm of casual gaming, the battle between Nintendo against platforms such as iOS and Android will intensify.  Mario may indeed be standing on a burning platform.

It is important to note, that this surge in smartphone gaming affects portable gaming much more than gaming as a whole.  Console gaming still holds the vast majority of the market, with iOS and Android powered games snatching just 3% of the total game market. 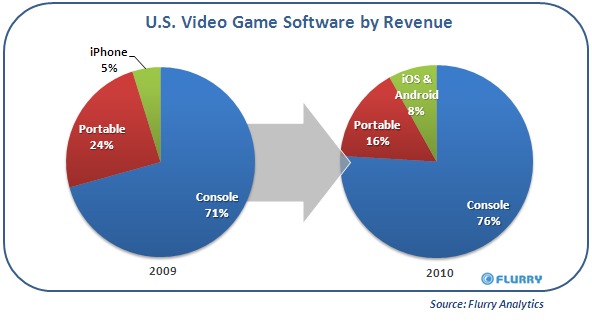