Smartphones aggressively saturated the mobile market in 2010, driving an increase in mobile media consumption by users worldwide, according to a new report from comScore. 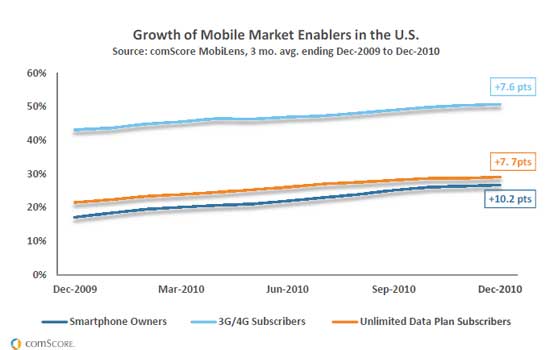 “And, the coming year has the potential to be even more exciting. As the mobile ecosystem continues to develop, including progress in mobile advertising and commerce, it’s clear that mobile is destined to become an increasingly important platform for digital marketers across all industries.”

*More than 75 percent of mobile subscribers in Japan are connected media users (used their browser, accessed applications or downloaded content) far surpassing the U.S. and European countries in this regard. Japan also saw nearly 10 percent of its mobile audience make a purchase with their mobile wallet in December 2010.

*Over the past year the number of mobile users that accessed a social networking site at least once a month via their mobile device increased by 56 percent to nearly 58 million users in the U.S. Even stronger growth occurred in Europe, with a 75-percent increase in the number of users over the last year to 42 million in December 2010.

*Network quality and cost of monthly plan were the top 2 purchase consideration factors for mobile subscribers in the U.S. and UK.