Social media use leads to higher satisfaction among owners of smartphones and traditional mobile phones, according to a new report from J.D. Power and Associates.

“It’s not unexpected that smartphone owners access social media sites from their device more frequently than traditional mobile phone owners due to features such as larger screens and QWERTY keyboards,” said Kirk Parsons, senior director of wireless services at J.D. Power and Associates.

“However, these findings demonstrate that equipping devices with powerful features and service is key to creating positive customer experiences with wireless devices.”

The study finds that wireless users who engage in mobile social media activity on their mobile device also tend to use it more often for calls, texts and data; are more likely to purchase additional wireless services in the future; and are also more likely to provide positive recommendations for their handset brand and service provider, compared with users who don’t use social media on their device.

“It’s clear that the gap in satisfaction between customers who use social media applications on their device and those who don’t is driven by several factors, but the critical ingredient is whether the user has a positive experience with the wireless device itself,” said Parsons.

“Providing features that facilitate social networking activity and make it easy for users to communicate and share information between various social media sites may be an effective way for service providers to further engage customers and increase loyalty.”

For the fifth consecutive time, Apple has the highest satisfaction among smartphone owners with a score of 795 and performs well in ease of operation, operating system, features and physical design. Motorola (763) and HTC (762) follow Apple in the smartphone rankings. 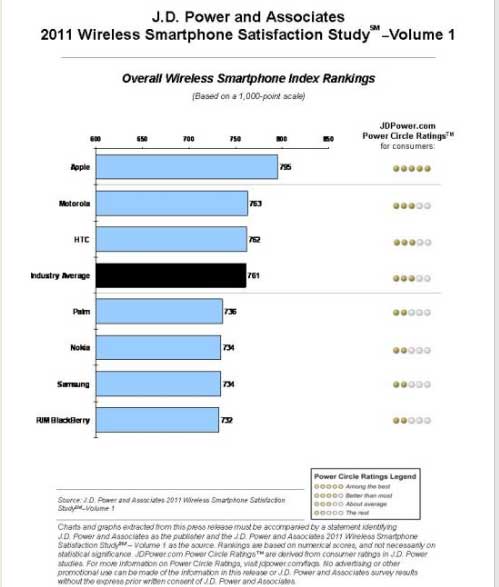 *The average price of a traditional wireless mobile phone continues to fall and averages $73 in 2011, compared with an average of $81 at the beginning of 2009. The decline is primarily due to discounts provided by handset providers and wireless service carriers to incentivize sales. Currently, 46 percent of owners report having received a free mobile phone when subscribing to a wireless service, which is a historical high.

*Those who report owning their device less than one year are significantly more likely to be more satisfied than those who have owned their wireless phone for a longer period of time (773 vs. 728).

Addicted to Angry Birds? Mike Tyson's Got A Cure