Smartphone Market Projected to Increase 50% in 2011

According to a study by the International Data Corporation (IDC), the worldwide smartphone market is expected to grow by 49.2% in the year 2011. In 2010, venders shipped 303.4 million smartphones, and that number is expected to climb to over 450 million this year.

“Overall market growth in 2010 was exceptional,” said Kevin Restivo, senior research analyst with IDC’s Worldwide Quarterly Mobile Phone Tracker. “Last year’s high market growth was due in part to pent-up demand from a challenging 2009, when many buyers held off on mobile phone purchases. The expected market growth for 2011, while still notable, will taper off somewhat from what we saw in 2010.”

The IDC report also projected market share for particular devices, saying that the Android operating system will take over the #1 spot by a wide margin in 2011. It is projected to garner 39.5% of the market. The next closest competitor is projected to be the Symbian OS, with 20.9% share.

The recent news that Nokia will abandon the Symbian OS in favor of the Windows phone has greatly shifted projections for 2015. The Windows phone is now looking to take over the #2 spot in 4 years, according to the IDC: “The new alliance brings together Nokia’s hardware capabilities and Windows Phone’s differentiated platform. We expect the first devices to launch in 2012. By 2015, IDC expects Windows Phone to be number 2 operating system worldwide behind Android.” 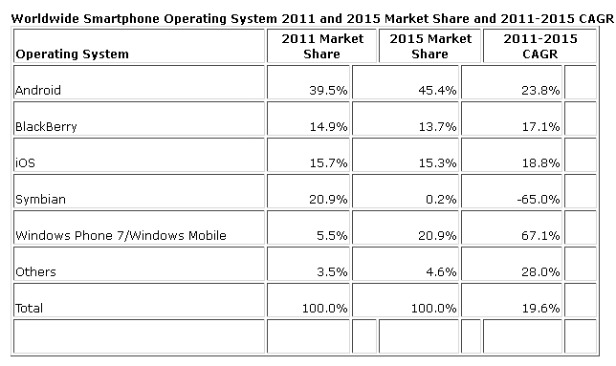