Skype announced today that it is expanding its operations in Silicon Valley. The company has signed a lease with Stanford University for a 90,000 square foot office space in the Stanford Research Park in Palo Alto.

"Silicon Valley will add to Skype’s excellent engineering team in Estonia, Prague and Stockholm, and will also become the home of regional marketing, business development, and the Skype for Business team," says Skype CEO Josh Silverman.

"Making this move is an exciting step for us," he adds. "Skype’s Silicon Valley offices are currently in San Jose and Brisbane, where approximately 80 employees work today. The plans are to relocate our Silicon Valley teams to the new Palo Alto space as early as October 2010. And, we hope to attract some of the best and brightest talent in the Valley, especially engineers who are skilled at building ultra-scalable infrastructure."

Skype is looking to build up its cloud technology team, and has numerous job openings listed here. 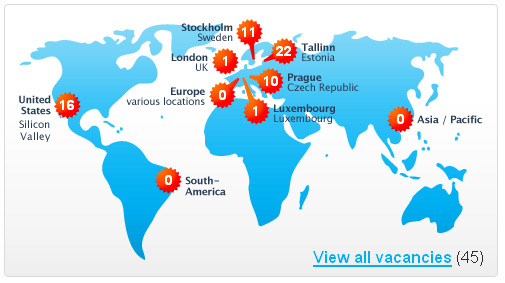 Google is trying its best to get in on Skype’s territory. Just yesterday, the company released a video and printable guide to show grandmas how to use its video chat feature in Gmail.