Signs That Blogging is Not Only Alive, But More Critical Than Ever

Every so often, one of those "social media vs. blogs" discussions comes up. Questions like "is social media killing blogging?" gets asked. Time and time again, the answer is a resounding "no", but various pieces of news released this week seem to really drive that point home.

Blogs: Are they more or less important in the age of social networks? Share your thoughts.

For one, AOL bought the technology blog TechCrunch for an undisclosed sum (which has been estimated to be at least $25 million) – a blog. Now, AOL doesn’t exactly have the reputation it once had as an ISP, but the company is doing all it can to revitalize itself and rebrand itself as a content-driven media company. The TechCrunch acquisition is a clear example. A Bloomberg article says the move is a possible way to "restore lost relevance". You may recall that AOL got rid of its social network, Bebo.

Forrester Research released a report indicating that content creation on social networks has slowed, despite global social network usage increasing. "A lack of growth in social creation translates into a lack of fresh ideas, content, and perspectives," said Forrester Research Consumer Insights Analyst Jacqueline Anderson. "For example, one-third of online consumers in the US regularly watch user-generated videos on sites like YouTube. But, only 10 percent of US online consumers upload videos they’ve created to public sites. The traits required to create social content are unique, and at this moment, the consumer market interested in these behaviors has plateaued." (emphasis added)

According to new research from Sysomos, about seven out of every ten tweets fail to earn replies or retweets. Covering the research, our own Doug Caverly writes, "Surprised?  So were we. Twitter’s gained a reputation for being a place to hold conversations, not give speeches. Still, Sysomos examined 1.2 billion tweets that were posted in the last two months before reaching its conclusions, so it’s pretty much a fact that just 29 percent of tweets produce reactions."

"Otherwise, Sysomos determined that the majority (79 percent) of those reactions are replies," adds Caverly. " Only 21 percent of reactions come in the form of retweets." 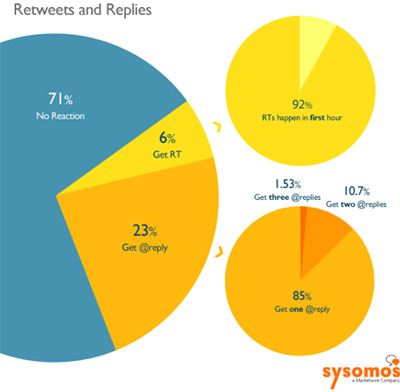 That may say something about Twitter as a means of producing content, but I still believe that Twitter can be a very powerful tool to create content and news. That has been proven time and time again (the Hudson River plane crash comes to mind). However, there is still plenty of "noise" and just like in real life, most of what people say isn’t worth repeating. I will say, however, that most of the retweets I see contain links, and those links very often point to content from blogs.

I think I would go so far as to say that from a business perspective, blogging is probably more critical than it has ever been, and social media is largely responsible. This is not because people are engaging less with social networks. It’s because they’re engaging more, and social networks open the doors for blog content to find its way to relevant audiences like never before.

Look at Facebook’s social plugins (including the "like" button). 2 million sites have added Facebook’s social plugins since they launched five months ago. "Likes" are now more important to search, as Facebook has made updates so that "liked" news stories appear when people do searches within Facebook. Google is champing at the bit to get this information (and CEO Eric Schmidt thinks they will one way or another).

Whether or not Google ever does get access to Facebook’s data, it’s in there to be searched, and much of that comes directly from blogs. Of course Google has no trouble indexing the blog content on its own, it’s more about the popularity and relevance of the content at the personal level. Facebook’s methods for this are simply another reason to create good content, and there’s probably no better or easier means to do so than with a blog.

I mentioned business. One more nugget of research released this week comes from the Pew Internet & American Life Project, which found that more than half of Americans do online research before making a purchase. How much of that research do you think comes from blogs – whether they find it through search or through social?

Do you think blogs are critical for business? Tell us what you think.