Should You Trust Influencers to Promote Your Brand? Consider These Problems First

Influencer marketing is drawing more and more suspicion from brands and advertisers alike. There is a growing concern in some business sectors that consumer trust in influencers is waning or has reached its peak. Empirical data, however, shows that influencers still have a lot of pull. They can still raise brand awareness, push customer loyalty, and boost engagement. One study by Marvrck also shows that cost per acquisition (CPA) was also far lower with influencer marketing compared to other types of advertising like Facebook ads. 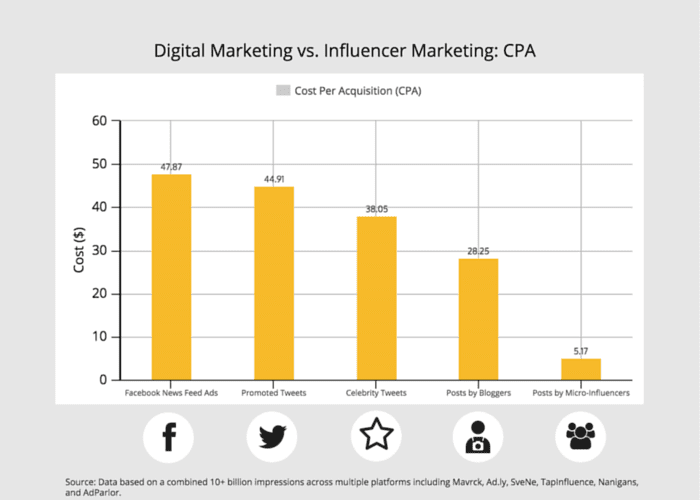 While there’s no denying that influencer marketing works, it has a lot of issues that have resulted in brands having a general lack of trust for influencers.

The majority of brands find that choosing the right metrics to use and measuring return on investment are the main challenges they face when it comes to influencer marketing.

Every marketing campaign should be based on measurable objectives, like an increase in revenue, higher brand awareness, or more social media followers. You need to determine your objective first. Once that’s done, you can then identify how you will track your KPIs and evaluate how the content or an influencer has performed.

Luckily, most of the tools used in tracking conventional and digital marketing are also appropriate for influencer marketing. For instance, tools like Google Analytics, promo codes, giveaways, vanity URLs, and UTM parameters can all be used to measure the results of an influencer marketing campaign. Social media platforms like Pinterest are also taking steps in this direction by giving access to their APIs to ensure that influencers and marketers can work well together.

Fake followers and fraudulent accounts are also behind the mistrust of influencers. According to a New York Times report, this practice is so rampant that about 15 percent of Twitter profiles are fakes and many celebrities and influencers buy followers to inflate their perceived social influence.

Too often, brands look for influencers with the largest number of followers and pay big money for access to them. So it’s not surprising that some influencers pad their numbers with fake accounts. Unfortunately, the practice messes up one crucial element of this marketing method—influencing another individual. After all, you can’t wield your influence over an imaginary person.

To combat this problem, brands should focus more on quality than quantity. Instead of looking at the numbers, they should concentrate on the kind of consumers that follow the influencer, and whether said influencer is suitable for the brand. Social media platforms should also put more effort into cracking down on dubious accounts.

More importantly, the influencers should hold themselves accountable and check for fake followers, even if it means they have to scroll through their list of followers and vet each one.

A social media account might have tens of thousands of followers but not have much influence. There are people who are influential in one area but not in another. For instance, an account that specializes in memes might have a million followers but those followers are not there to buy anything. They just follow the account for its entertainment value.

Brands should first determine whether an influencer is considered trustworthy by their followers or just a digital performer. The former has an impact on a follower’s buying decision while the latter doesn’t. Companies can tell which is which by their posts. Consumers respond to honesty and passion, and a good influencer shows these in their posts.

4. Competition Between Influencers and Marketers

If your brand has a marketing team, they may view influencers as a direct threat. This implied threat is due to the fact that influencers work in direct competition with traditional marketing strategies. Moreover, a lot of marketers don’t totally trust social influencers with regards to content development.

To get past this problem, you’ll need to understand how influencer marketing actually works. Influencers have to be authentic and strive to show this in the tone and passion of their posts. In contrast, your marketers need to double check everything or have some say in the content creation process. You’ll need to find a good compromise between the two groups to prevent conflict.

Many consumers have relationships with influencers that are more like friendships. And according to Neilsen, 92 percent of consumers trust the recommendations of family and friends. For this reason, influencers still have the power to greatly impact a brand. However, the problems that come with influencer marketing have gone largely unresolved.

Part of the problem is that these issues have only recently come to the forefront, so best practices have not yet been established. Brands and influencers are still learning and adjusting.

Moving foward, more influencers will need to audit their followers and check for fake accounts. Branded content should merge well with integrated content, and sponsored posts should be kept to a minimum. Meanwhile, it’s imperative for brands to thoroughly research their potential partners, making sure they only work with credible influencers and choose the right platforms to promote their products and services.

Study Says Half of All Tasks Will Be Automated… Are We Facing a Jobless Future?

Identity as a Platform on the Cloud is Hot, Hot, Hot