Should Bert & Ernie Get Married? Online Petition Thinks So [UPDATE]

Bert & Ernie, America’s beloved puppet best friends, have been around for decades. And for much of that time, some have speculated that the Sesame Street duo represent a gay couple.

So, here’s the evidence that leads some to this conclusion: Bert & Ernie are two men, living together for an extended period of time. Although they sleep in separate beds, they sleep in the same room – kind of a Lucy/Ricky scenario. Many point to specific mannerisms that might give away a specific sexual orientation, but their existence is subject to debate.

And they love each other. Deniers say that it is a best friend type of camaraderie, supporters of the gay-couple belief would say that the characters “conduct themselves in the same loving, discreet way that millions of gay men, women and hand puppets do.” 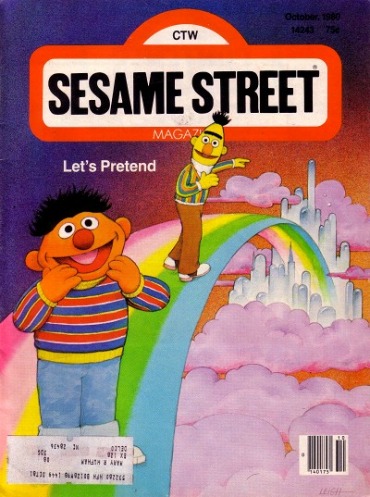 While gay marriage supporters have, for quite some time, used the example of Bert & Ernie as a couple as a sort of rally cry for their cause, one online petition thinks that allowing Bert & Ernie to finally marry would be a great thing for LGBT rights.

Hosted on the popular change.org online activism platform, the petition “Let Bert & Ernie Get Married on Sesame Street” was started by one woman and now has over 1,100 signatures. it was started exactly one week ago today.

Here’s what the petition letter says:

In this horrific age of LGBT kids taking their own lives, they need to know that they ARE BEAUTIFUL and their lives are worth living. Aside from those that are committing suicide, the bullies that facilitate these tragedies need to learn that homophobia is NOT okay. They need to know that acceptance of their fellow human beings would indeed plant a seed of peace that will reverberate throughout the world. We are not asking that Sesame Street do anything crude or disrespectful. Only that they allow Bert & Ernie to marry or even add a transgender character to the show. It can be done in a tasteful way. Let us teach tolerance of those that are different. Let Sesame Street and PBS Kids be a big part in saving many worthy lives

The Sesame Workshop has denied that Bert & Ernie were created as a gay couple, saying that “Bert and Ernie, who’ve been on Sesame Street for 25 years, do not portray a gay couple, and there are no plans for them to do so in the future. They are puppets, not humans. Like all the Muppets created for Sesame Street, they were designed to help educate preschoolers. Bert and Ernie are characters who help demonstrate to children that despite their differences, they can be good friends.”

The rumor gained steam in 2010 when the official Sesame Street Twitter account (which posts messages from its characters) said this, speaking as Bert:

Ever notice how similar my hair is to Mr. T’s? The only difference is mine is a little more ‘mo,’ a little less ‘hawk.’

Some said that the “mo” was a clear reference to “homosexual.” Are the makers of Sesame Street giving sly hints about Bert & Ernie via Twitter? Here are some recent tweets, you decide –

@sesamestreet
Sesame StreetBert: Ernie says he has a great joke about peanut butter but he won’t tell me. Says he doesn’t want to spread it around. (OHH I get it now.)

15 days ago via web · powered by @socialditto

@sesamestreet
Sesame StreetErnie: No I didn’t, Bert – they were MY feet. Heeheehee!

161 days ago via web · powered by @socialditto

What do you think? Could a Bert & Ernie marriage help teach equality and tolerance? Let us know in the comments.