Retail sites, shipping sites, and greeting cards sites all saw surges in traffic in December due to the holiday season, according to a new report from comScore.

"December proved to be a strong month for the retail category with Tuesday, Dec. 15 ranking as the heaviest online spending day of the year – and of all time – at $913 million," said Jack Flanagan, executive vice president of comScore Media Metrix.

"Holiday seasonality also fueled visitation to Shipping sites, which continually see their highest volume of traffic during the month of December."

Not surprisingly, retails sites climbed in December as Americans search the Internet for holiday deals. The top gaining retail categories were jewelry/luxury goods/accessories, sports/outdoor, and flower/gifts /greeting sites, each growing more than 20 percent compared to November. 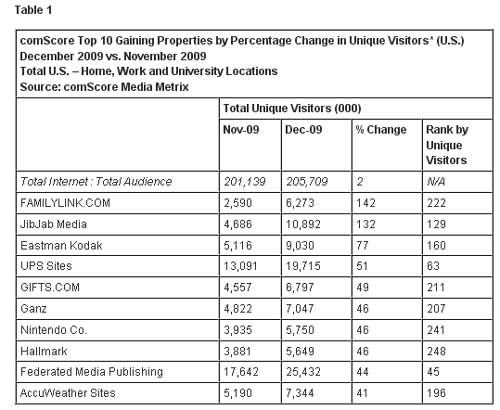 Traffic to shipping sites spiked in December as Americans rushed to ensure delivery of their gift purchases in time for the holidays. The category attracted 36.6 million visitors during the month, representing a 33-percent increase in traffic. UPS sites led the category with 19.7 million visitors (up 51 %), followed by USPS.com with 15.9 million (up 40 %) and FedEx with 12.6 million (up 36 %).

Get Your Breadcrumbs in Google for More Links in Results