Apparently, it’s pile on the folks at Apple week.  The company now finds themselves involved in two major app controversies, and it’s only Tuesday.  Yesterday, we told you about the heat Apple was taking  from gay-rights activists for a 4+ rated app in their app store offering to cure homosexuals through the power of Christianity.  Today, four U.S. Senators asked Apple to pull apps that allow users to report and avoid DUI Checkpoints and other police interactions.

There are multiple apps that fit into this category, but one such app is “Buzzed,” whose app store page still reads, “FREE TIL St. Patty’s Day!!”  The description reads:

Buzzed is the application for the iPhone and iTouch that will provide you with detailed information regarding if, when and where a DUI checkpoint will be in your area. Using your apple device’s GPS system Buzzed will automatically access our constantly-updated server and report whether or not a DUI checkpoint is currently or planned to be operated within a 100-mile radius of your current location.

Furthermore, in what seems to be added in an attempt to avoid any liability:

The second function that Buzzed can perform is our “Call a Cab” service. Again, using the GPS system within the device, Buzzed will automatically provide you with a list of available taxi services that are in your area. There is no need to close the application to dial the cab, just simply select the cab company you wish to hire and the application will automatically dial the cab. 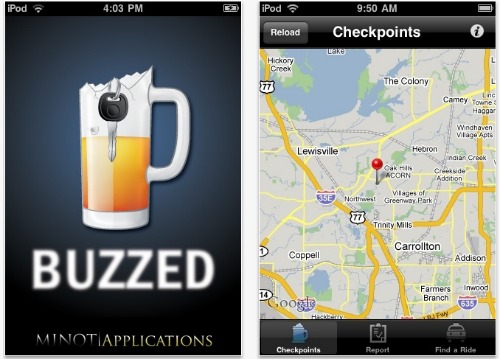 Tasteful? Not exactly.  Useful? Possibly.  Legal?  Questionable.  Either way, four Senators want them gone.  Senators Harry Reid (D-Nev.), Charles E. Schumer (D-N.Y.), Frank Lautenberg (D-N.J.), and Tom Udall (D-N.M.) wrote a joint letter to VP of iPhone software Scott Forstall.  The short letter quotes drunk-driving death statistics, calls it a “scourge” and tags the apps as “harmful to public safety.”  In the end they make sure not to stomp all over Apple with a small nod to their amazing technology:

“We appreciate the technology that has allowed millions of Americans to have information at their fingertips, but giving drunk drivers a free tool to evade checkpoints, putting innocent families and children at risk, is a matter of public concern. We hope that you will give our request to remove these applications from your store immediate consideration.”

An online petition is one thing, but Uncle Sam getting involved? Yikes.  Would this be a responsible move by Apple, as the apps in question are harmful?  Or is this a little to close to Big Brother for you?
Tell us what you think.