Look for many, many interesting new PayPal apps and services to surface over the next four or so months.  The second PayPal X Developer Challenge was announced today, and the competition is sure to draw lots of participants with $150,000 in prizes on the line.

A PayPal representative explained in an email to WebProNews, "[T]he grand prize is worth $100,000 – $50,000 will be deposited directly into the winner’s PayPal account and the other $50,000 will go towards waived transaction fees."

Then, to account for the difference between $100,000 and $150,000, there are the "X Awards," which "will allow developers to win awards for outstanding apps in various categories. . ."  The categories will cover matters including which apps best take advantage of Yahoo’s and eBay’s platforms. 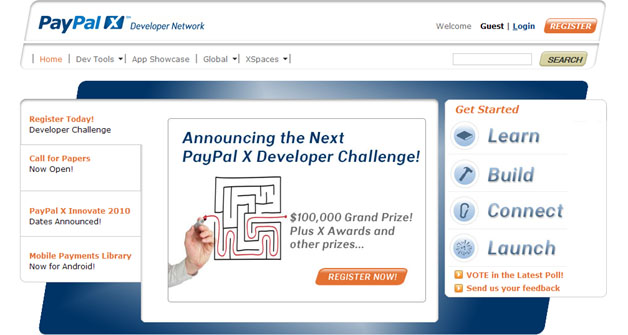 As for when all the competing and prize-winning is scheduled to occur, developers can register now and should be sure to register before the end of August 4th (a chance to win one of ten iPads is at stake).  Then the winners will be announced at PayPal X Innovate 2010 on October 26th and 27th.

Google’s most recent attempt to generate interest in Google Checkout, which involved giving users $5, $10, and $20 discounts, seems a little half-hearted by comparison.