The Seattle Police Department has started a new Twitter account to tweet information about stolen vehicles with the hopes of helping victims of auto theft recover their property sooner.

When a car is reported stolen in Seattle, employees in the Seattle Police 911 Center will tweet the color, year, make, model, body style and license plate of the stolen car.  Twitter followers who spot a car that has been tweeted as stolen on “Get your car back” can call 911. 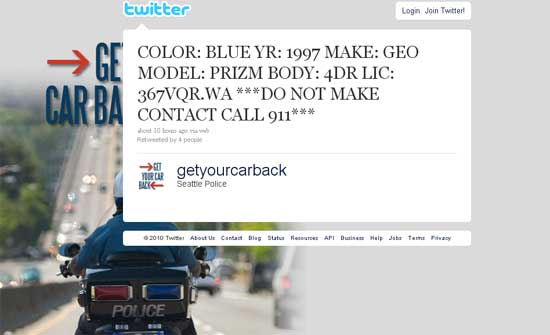 All 911 calls will be screened to ensure that the car information is correctly matched and to verify that the car has not been returned to its rightful owner. If the car is still listed as stolen, the information will be broadcast so that officers can respond to the area.

According to the department, through October, 3,011 cars have been stolen in Seattle. That is an average of 9.9 a day, up from 8.46 cars per day during the same period a year ago.

“I believe that this program will integrate seamlessly into our strategy to prevent and reduce auto theft in Seattle,” said Seattle Police Department Chief, John Diaz.

“It will also serve to increase public awareness on the subject.”