Search Google For Just Businesses That Are Currently Open

Google has launched a feature for its iPhone and Android mobile search that lets you see results for only local businesses that are actually open at the time of the search. While this may not seem incredibly helpful during normal business hours, it marks a tremendous boost in relevancy for late night searches.

Google uses the example of if you’re trying to get some pizza at one in the morning, but this can be potentially useful in a lot of cases. A lot of small businesses keep odd hours. Some close earlier than others. Some aren’t open on weekends, or on Sundays. Even large restaurant chain Chik-fil-A is closed on Sundays. 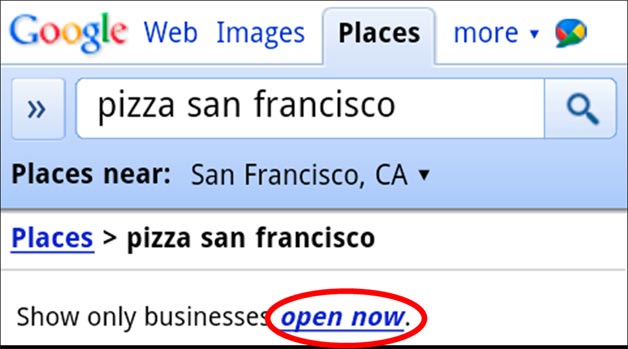 "Other local search options available globally include filtering by star ratings (find a highly-rated restaurant for your first date) and by distance (especially handy when you’re on foot)," Google says. "You may have noticed other improvements as well, like the addition of images, reviews from around the web and bigger buttons for viewing a map or calling a business directly. Each business’s open hours are also shown in the result snippets."

Google has been placing significantly more focus on local in recent months, having even moved Marissa Mayer to a position overseeing this stuff. Expect Google to continue making local search better and better, even as it struggles with quality issues for its regular results.

In fact, Google is already showing more and more local results for queries by default.