Update: Scotty McCreery did win American Idol as leaked by the Drudge Report earlier today. Feel free to give us your thoughts in the comment section below the article.

The final results show isn’t until tonight, but the news about the American Idol Winner may have already leaked.

If these sources are indeed correct, has America made the right decision? Or is Scotty, as the headline suggest, un-cool, un-hip and country fried? If country music isn’t your thing, this finale was not for you. The finale sing-off last night was decidedly all country as the two contestants covered the likes of George Strait and Pam Tillis.

What do the folks over at Likester think? The trend-analyzing startup has been running Likester Idol, crunching the Facebook “like” numbers each week to predict the elimination results. Last week they predicted the elimination of Haley Reinhart and were proven correct.

Likester notes that Scotty grabbed over twice the total Facebook likes as Lauren. They also give her props for her performances last night but lament that she never really had a chance. 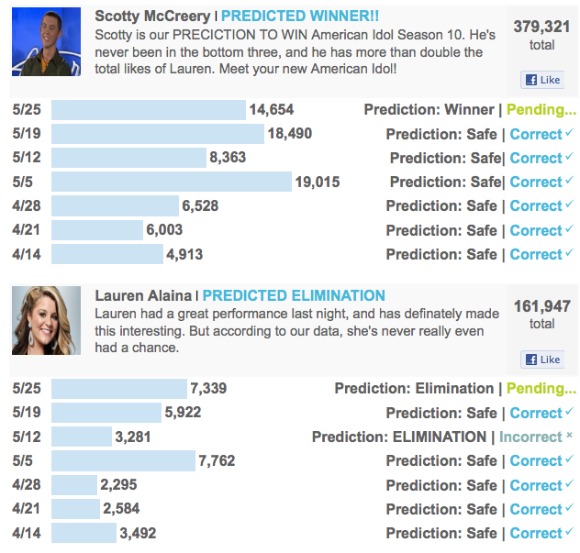 As of this morning, it looks like it might be a landslide for Scotty McCreery. Do you think he will win? Should he win?

Also, how do you feel about the all-country finale?  If it’s not your cup of tea, who do you think should have been in the final pairing?

New Samsung Galaxy Tab Is On The Way

May 25, 2011
Recent Posts
Registration is disabled.