Salesforce Launches Chatter.com For Any Business With Company Email Addresses

Salesforce has launched Chatter.com as a way for businesses to create free, private social networks for their companies.

Chatter, the product, has been around for a while now, and is often described as a "Facebook for the enterprise", but it has been part of the company’s Salesforce CRM and Force.com offerings. Now chatter.com is free to anyone with a company email address. 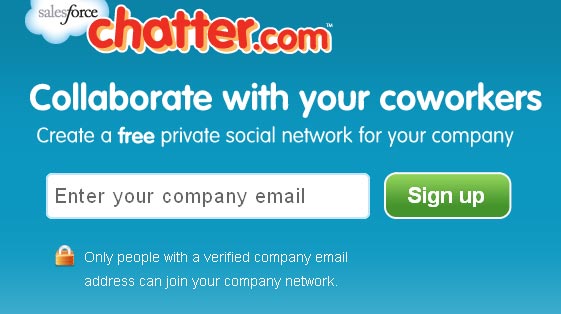 Salesforce will start a TV ad campaign for Chattter.com on Sunday. This will be the company’s first broadcast ads. The ads were directed and produced by will.i.am, who collaborated with the company’s marketing team using the service itself.

"During the production of the two commercial spots, we were collaborating on documents, scripts, artwork, downloading, uploading – all securely in the cloud using Chatter," said will.i.am.  "Any task can be solved when you have a team working cohesively."

Since launching Chatter, Salesforce has launched various incarnations, such as Chatter Mobile and Chatter Mobile for Blackberry. Still, Chatter.com is likely to push Chatter into more mainstream business use.