Rumor: AOL May (Not) Be Buying Mashable

Update: According to Business Insider, Pete Cashmore had this to say on the matter:

We’re very open to partnerships and always talk with those that get in touch. We’ve certainly spoken to lots of potential partners, some of those conversations more significant than others. But I don’t feel that any of those conversations reached a point at which Mashable is likely to cease being independent.

Original Article: In mid-2009, all-things-social-media blog Mashable surpassed TechCrunch as the top tech blog in terms of traffic. Now, Mashable is rumored to be on its way to becoming an AOL property.

Gawker’s Valleywag appears to be the source of the rumor after hearing from "a source at the Internet conglomerate" that AOL was interested in buying Mashable. Mashable owner Pete Cashmore has since told the publication:

"We don’t comment on speculation, but we do hold our writers in high regard and pay a competitive salary for their tireless efforts." 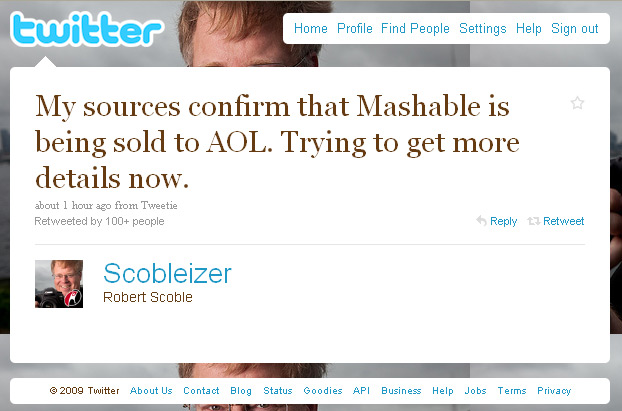 It’s still only a rumor at this point, but it will be quite interesting to see how this one unfolds. Valleywag thinks the only hold up might be negotiations.

Mashable certainly fits the profile of what AOL is trying to do these days. They cover a wide spectrum of topics (horizontally, if you will), while staying somewhere within the realm of social media, for the most part. One has to wonder if the writers would stay the same if such a deal were to go through.

> The New AOL is Now Live

Google Offers On2 An Additional $26.5 Million