It’s almost here, people.  The moment we’ve all been waiting for – The Royal Wedding is tomorrow!  Of course, the world of social media is projected to explode on the day of the nuptials, and that fact hasn’t escaped those at Twitter.

Twitter posted this pic to their Flickr account showing co-founder Biz Stone prepping their servers for the tidal wave of tweets by enthusiastic royal fans, and perhaps royal haters as well.  Funny pic – especially the jab at incessant Bieber fans. 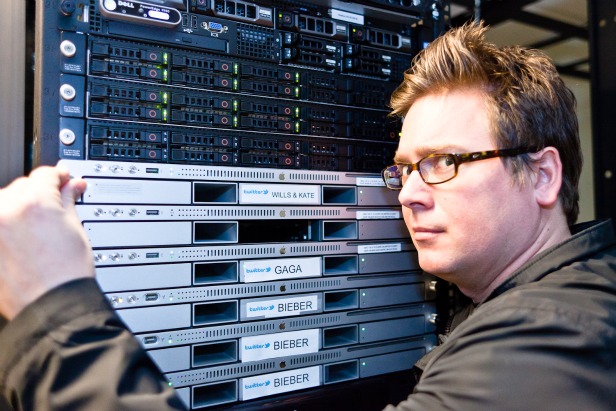 Twitter’s Global Comms account tweeted the pic, but stated that they will definitely be able to handle tomorrow’s  big day:

@twitterglobalpr
Twitter CommsRumours of Twitter needing extra servers for the Royal Wedding are greatly exaggerated. We only need one. http://bit.ly/royalserver

22 hours ago via web · powered by @socialditto

Although the wedding isn’t until tomorrow, Twitter already has a promoted hashtag – #RoyalWedding and “William and Kate” is already an organic trending topic.  Here are two of the “top tweets” that involve William and Kate:

@Lord_Voldemort7
The Dark LordWilliam & Kate are getting married soon. I don’t really know any details. I’ve been very busy. Not giving a damn is time consuming.

17 hours ago via web · powered by @socialditto

If the news coverage is any indication, U.S. Twitter users will provide a healthy chunk of the tweet volume.  Nielsen recently revealed that U.S. coverage of the event per capita, is greater than British coverage.  And remember, you can watch the entire event live streaming on YouTube.