UPDATE: It appears that Ebert’s Facebook page is back up and running. Even though the page was only down for about an hour, it looks like the story here remains the relative ease at which upset parties can take down someone’s page.

ORIGINAL ARTICLE: It looks like a couple of people upset about Roger Ebert’s comments yesterday have taken the only action they can – tattling to Facebook. It appears that the individuals have used Facebook’s page complaint mechanism and reported Ebert’s page as malicious or obscene.

Yesterday, following the death of Jackass star Ryan Dunn in a car wreck, Chicago Sun-Times critic Roger Ebert took to Twitter to express his feelings. After first saying “Ryan Dunn, RIP” Ebert attacked Dunn’s poor decision making. He tweeted that “friends don’t let jackasses drink and drive.” There are multiple reports that Dunn was drinking prior to the crash. His passenger was also killed in the incident.

The comment sparked a debate across the interwebs – was it too soon? First off, was Ebert correct? Even in the wake of a tragic death, should we not forget that Dunn (allegedly) chose to drink and drive, endangering the lives of others? Many believed the comments were callous no matter what you feel about drunk driving, as Dunn has friends and family who cared about him. Others say Ebert simply spoke the truth.

Comments on an article about the incident yesterday on WebProNews suggested that most felt that Ebert’s remarks were insensitive. In defending himself, however, Ebert linked to Perez Hilton’s article on his tweet. As Ebert suggests, the majority of those commenters feel that his remark was justified and true –

@ebertchicago
Roger EbertPerez Hilton’s readers agree with me and not with Perez about my tweet on Ryan Dunn. He drank, he drove, 2 people died. http://bit.ly/k6Uh9Y

13 hours ago via SocialOomph · powered by @socialditto

@ebertchicago
Roger EbertFacebook has removed my page in response, apparently, to malicious complaints from one or two jerks. http://t.co/RdzUxll

48 minutes ago via web · powered by @socialditto

@ebertchicago
Roger EbertFacebook! My page is harmless and an asset to you. Why did you remove it in response to anonymous jerks? Makes you look bad.

44 minutes ago via web · powered by @socialditto 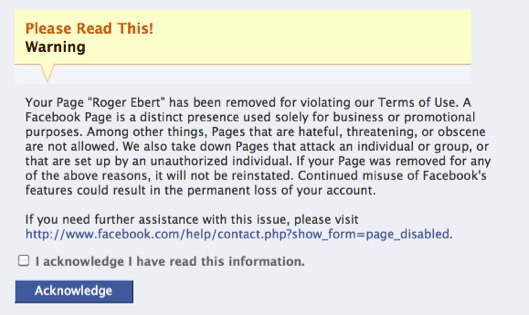 This isn’t the first time Roger Ebert has run into Facebook trouble. Pranksters have had his Facebook page taken down before with complaints, based on opinions of Ebert’s that the didn’t like. Also, Facebook once removed his blog post detailing his jaw surgery, calling it “abusive content.” Ebert said that his blog entry had been “idiotically blocked” by Facebook.

I can say with virtual certainty that Roger Ebert’s Facebook page does not contain anything obscene or threatening, as I am a fan of it myself. It looks like people upset about his Ryan Dunn remarks have exploited the fact that if you just keep reporting a page as offensive, chances are it may be taken down.

No matter what you feel about Ebert’s remarks on Dunn’s death, having his Facebook page removed on bogus complaints is a questionable response. Is the underlying story here have to do with the relative ease of getting someone’s Facebook page removed? This has happened to Roger Ebert more than once, have you had your Facebook page taken down on suspect claims? Let us know in the comments.

Add your condolences to the Ryan Dunn page on FamousDead.com.