Fallen baseball star Roger Clemens, one of the poster boys of the steroid era, has just been given the law equivalent of a called third strike off the outside corner – or maybe more like a no decision.

Today, the judge presiding over his perjury trial declared a mistrial, based on rookie mistakes by the prosecution team.

U.S. District Court Judge Reggie Walton stopped the prosecution right in the middle of a video that they were showing the jury. That video, of Clemens’ 2008 testimony before congress, contained the mention of a piece of evidence that Walton had previous ruled inadmissible. 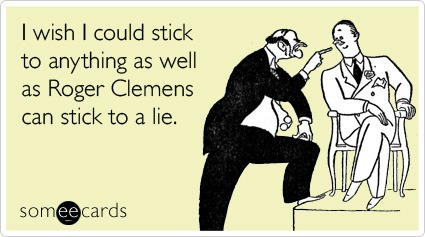 Friend and former NY Yankee teammate Andy Pettitte went on record and said that Clemens told him about his steroid use back in 1999. Although Clemens denied that claim, Pettitte says that he told his wife, Laura, about the admission.

Judge Walton previously disallowed prosecutors the chance to bring Laura Pettitte in to testify in the current trial, saying that he didn’t want her to testify because she hadn’t actually spoken with Clemens herself.

That video that the Judge stopped today of Clemen’s 2008 congressional hearing included a mention of Laura Pettitte’s statements by Representative Elijah Cummings.

This did not fly with Judge Walton. He said that didn’t know how to “un-ring the bell.”

“I think that a first-year law student would know that you can’t bolster the credibility of one witness with clearly inadmissible evidence,” Walton said.

The Judge went on to say that he “can’t in good faith leave this case where a man’s liberty is at risk.”

The interwebs are not as concerned with procedure. Although I don’t see the vitriolic response associated with another recent trial outcome, it’s still disgruntled. Here’s some Twitter response –

27 minutes ago via TweetDeck · powered by @socialditto

25 minutes ago via Twitterrific for Mac · powered by @socialditto

@robixsmash
robix smashIt’s a good thing we spent all of that money on the Roger Clemens trial, eh? #fail

26 minutes ago via Twitter for iPhone · powered by @socialditto

26 minutes ago via Twitter for Android · powered by @socialditto

9 minutes ago via web · powered by @socialditto

34 minutes ago via web · powered by @socialditto

Googler: Here's How to Get Your Facebook Friends on Google+