Research in Motion (RIM) is planning to make its popular BlackBerry Messenger (BBM) available on Android and iOS platforms. What’s RIM thinking, and how will a cross-platform BBM impact your enterprise?

While RIM made a name for itself through its email support, today’s users are much more inclined towards the instant gratification that SMS texting, IM chats or BlackBerry Messenger (BBM) provide. BBM push notifications and ability to see if the person you’re “BBMing”, the act of BBM chatting, has received or read your note and is in the process of replying, provide immediate gratification that email simply doesn’t.

Today, BBM is only available on BlackBerry devices, making it easy for non BlackBerry owners to feel outside of the loop when your BlackBerry wielding friends, colleagues and business contacts are BBMing.

While it pains me to say, as a long time BlackBerry user, and faithful Canadian, I would gladly leave for an iPhone or Android device if I could get BBM on those devices. Far more than push email and a physical keyboard, BBM is the key feature that keeps me a BlackBerry user.

BBM on Android and iOS could accelerate migration away from RIM

Considering the tight race that RIM is facing against Android and Apple, and how important BBM is to keeping users on a BlackBerry device, I was surprised to read that RIM is planning to offer BBM on non-BlackBerry devices. The Boy Genius Report blog reports:

…we’ve been told RIM will offer stripped down versions of the BBM experience BlackBerry owners know and love. That way, Android and iOS users can communicate with practically anyone who has a smartphone using BBM, but they might not be able to share photos, location, or videos (when RIM crosses that bridge). Users who want the full BlackBerry Messenger experience will still need a BlackBerry smartphone to get it.

This move is increasingly difficult to understand when one looks at RIM’s revenue by source from their latest fiscal quarter 3Q11 ended November 27, 2010. 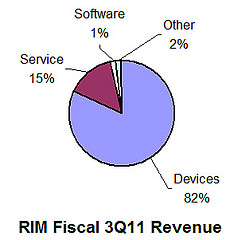 With over 95 percent of RIM’s new revenue linked to devices sold or active on a carrier’s network, why would RIM make it easier for users to leave the BlackBerry platfrorm?

RIM may be hoping that the stripped down BBM experience on non-BlackBerry devices could attract new users from the Apple and Android camps. This seems like wishful thinking, especially considering BlackBerry’s lack of application parity, ease of use or device specifications that would have attracted users to iPhone or Android devices. To balance this upside, if there is any, RIM must balance against the downside risk of losing exiting BlackBerry users who are currently tied to a BlackBerry device because of BBM alone – like yours truly.

It’s possible that RIM’s strategy team expects users like me to leave the BlackBerry ecosystem over time anyway. At least this way, they may be able to make some money off users like me through BBM on a non-BlackBerry device.

RIM may be hoping that making BBM cross platform would allow them to own the messaging category, much like GoogleMaps owns the location and map application category across Android, iOS and BlackBerry devices.

While RIM may very well own the messaging category across smartphones, the burning question is, so what? Does RIM intend to capture advertising revenue through BBM on non-BlackBerry devices? Good luck with that not ruining the user experience.

Does RIM intend to charge a one-time or ongoing fee to access BBM from a non BlackBerry device? I’d happily pay such a fee, but let’s do some quick math.

Based on fiscal 3Q11 results, RIM nets approximately $300 from a new BlackBerry device purchase and approximately $60 per active subscriber per year. Over a three year cycle, RIM stands to collect $480 per subscriber, or about $160 per year.

If I leave my BlackBerry behind for an iPhone or Android device, I’d probably pay about $20 per year for BBM access. Keep in mind that a cross platform BBM alternative, Whatsapp, costs $0.99 on the iTunes App Store.

It’s more than possible I’m missing something that RIM’s strategy gurus see. I am however hoping that RIM goes ahead with this plan, and it’s a net positive for RIM’s business.

Continued pressure on IT for cross-platform Mobile device support

If RIM does go ahead with this plan, IT departments can only expect increased interest in non-BlackBerry device usage requests to access enterprise systems and applications. Plan to adjust your enterprise mobile policies or face user complaints.