Rick Santorum Trending on Google Thanks To Jon Stewart (NSFW)

Today is Republican Presidential candidate Rick Santorum’s birthday. And what could be a better present than being a trending topic on Google? After being mentioned on last night’s Daily Show with Jon Stewart, Santorum is, as of this post, 12th on Google Trends.

Except the popularity is leading people to discover something less than savory regarding the former Senator from Pennsylvania.

Santorum is the victim of a Google bomb, or briefly, the intentional manipulation of page rankings on Google search. The most famous Google bomb happened back in 2004 when an effort made it so George W. Bush’s bio page was result #1 when users searched the phrase “miserable failure.”

If you search “Rick Santorum” on Google, the top result just under the news section is not wikipedia, or his official website – it’s a rather interesting fake definition.

The Google bomb campaign began at the behest of popular blogger Dan Savage back in 2003. Santorum had made some remarks comparing homosexuality to pedophilia and bestiality, which obviously offended the gay community. They decided to fight back by manipulating the page results to display their preferred description of the then Senator right at the top. It worked, and this is what search results for “Rick Santorum” have looked like for years: (Warning, it’s a little crude) 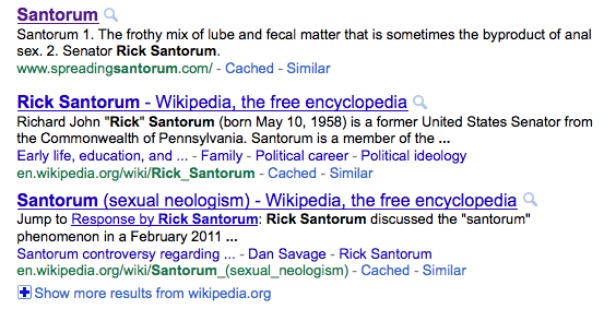 Santorum is certainly not the most buzzed about presidential hopeful. But today, he finds himself in the Google Trends mix thanks to Jon Stewart. On last night’s Daily Show, Stewart asked people to Google Santorum, and it looks like they listened. Stewart joked, “he might as well change his name to lemon party.” If you don’t know what that is, don’t Google it – it’s disgusting and highly offensive.

Now I won’t speculate that Santorum’s “Google problem” will knock him out of the race, but candidates have been bounced for less. Remember Howard Dean’s scream? Yeah, this is totally worse.

What Would Google Search Quality Be Like Without AdSense?

May 10, 2011
Recent Posts
Registration is disabled.