U.S. paid search spend from retailers has increased nearly 37 percent ahead of Black Friday and Cyber Monday, compared to last year, according to a new report from SearchIgnite.

The increase in retailers’ online PPC spend appears to be paying off as the economy bounces back from the recession; the rate at which consumers converted after clicking on a paid search advertisement was up 28.7% and their Average Order Values from online shopping were up 20.7% YoY.

"The increase on search spend among retailers is promising for the state of the search market overall," said Roger Barnette, CEO of SearchIgnite. 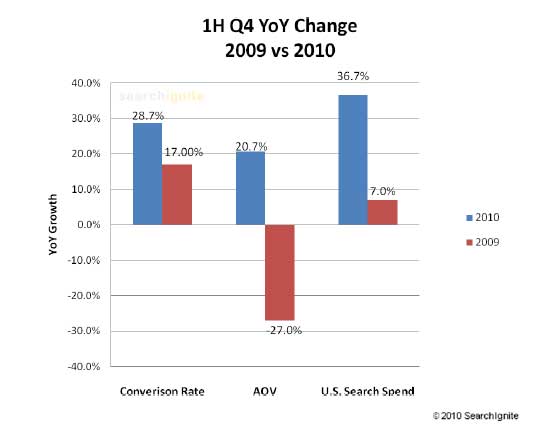 "More promising, however, is consumers’ increased Average Order Values and conversion rates. We expect this to be a very strong holiday season for e-commerce as the economy bounces back and consumers increasingly go online to do their shopping."

*CPCs are rising for retailers: CPCs are rising. Despite widespread speculation that CPCs would increase specifically on Yahoo/Bing following their integration, CPCs rose most notably on Google (13% YoY), compared with only 4% rise on Yahoo/Bing.