Android is now the leading smartphone platform according to Canalys, which just published its Q4 2010 report on the subject. Shipments of smartphones with Google’s mobile operating system reached 32.9 million.

The fourth quarter saw 101.2 million smart phone shipments in all, representing an in crease of 89% year-over-year.

"2010 has been a fantastic year for the smart phone market," says Canalys VP and Principal Analyst Chris Jones. "After a difficult 2009, the speed with which the market has recovered has required real commitment and innovation from vendors and they have risen to the challenge. But vendors cannot afford to be complacent. 2011 is set to be a highly competitive year with vendors looking to use new technology, such as dual-core processors, NFC and 3D displays, to differentiate their products and maintain value." 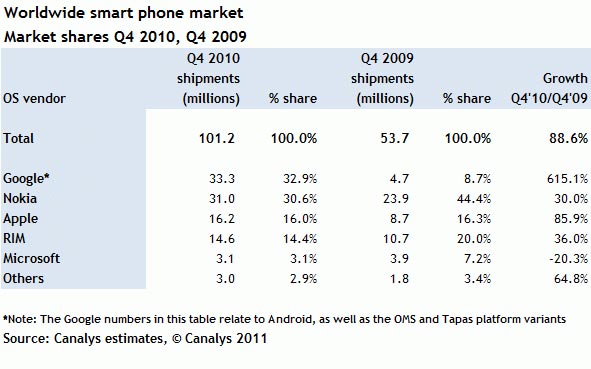 "The US landscape will shift dramatically this coming year, as a result of the Verizon-Apple agreement," another Canalys analyst, Tim Shepherd, said. "Verizon will move its focus away from the Droid range, but the overall market impact will mean less carrier-exclusive deals, while increasing the AT&T opportunity for Android vendors, such as HTC, Motorola and Samsung."

The firm notes that Android was by far the largest smart phone platform in the US market for the quarter, with shipments of 12.1 million units (about three times those of BlackBerry devices).

On a related note, Android is also starting to eat into Apple’s share of the tablet market.

No "Actors" for The Social Network