Here are a couple odd facts for you: compared to people everywhere else, folks in North America dislike Chrome.  And individuals who live in Mexico, the U.S., and Canada are unusually big fans of Internet Explorer.  That’s what new Quantcast data implies, anyway.

It turns out that Chrome is least successful in North America.  Firefox has also failed to catch on here the way it has everywhere else, and somehow, North America remains Internet Explorer’s best stronghold.

Now for the flip side of things.  According to Quantcast, Chrome actually does best in South America.  Also, Europe is where Firefox has won the largest market share, and where Internet Explorer has cornered the smallest. 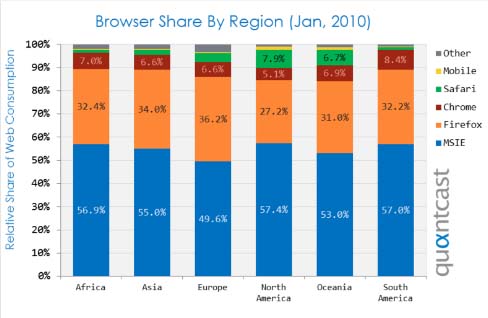 Confused?  Marshall Kirkpatrick wrote, "At the very least it means that we North Americans should remember where we stand in terms of online sophistication by our mainstream population, relative to some other places in the world."