This week at SXSW, Qik, which was recently acquired by Skype, launched Qik Video Connect for the iPhone. WebProNews spoke with co-founder Bhaskar Roy about the product at the event.

“Whoever are my friends on Qik – I can watch a feed of what they’re doing,” he explains. “So for example, at SXSW, I pull up the feed, and all my friends that have been recording videos and doing things – I can watch them and enjoy them. It provides a complete mobile video solution for you to interact with your friends and family.” 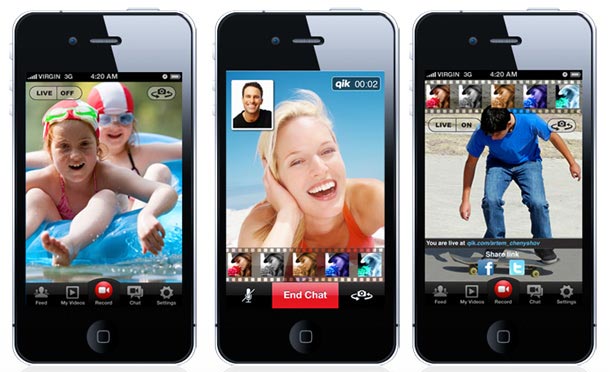 “We started back in 2006 – June – and our premise was how can we make video very interactive – especially over the cell networks, which has its own variability to it, so how can we provide a very compelling video experience to the users of mobile phones, and that’s how we started,” Roy says, recalling the early days of Qik.

They launched a Qik public beta in July 2008.

Qik was then acquired by Skype this past January. As Skype purchased the company, Qik was already available on over 200 different phones running Android, iOS, Symbian, BlackBerry OS, and Windows Mobile. On many of them, Qik comes preloaded.

“The entire product that we are launching actually leverages the capabilities tha we have built, and this capability is not just on the iPhone (which works today) but we have brought it to all the other phones as well,” says Roy. “It leverages the cloud as a storage capability so it uses cloud to wherever it’s recording in order to provide the best quality of experience.”

If you’ve watched much video on your phone, you probably know that it tends to drain the battery. This is something Qik has considered thoughtfully, according to Roy.

“What we have done is – that’s one of the key things that we have worked very hard on…that’s where the cloud comes in, where we try to put more processing by the cloud servers, rather than try to do it on the handset,” he says. “So if you’re trying to do more on the handset – trying to do more and more here – obviously you’re gong to leverage more CPU, more battery power, so we tried to put all the processing – all the hard processing on the server – let the servers handle that, and so that way the client itself becomes a light client, and so it doesn’t consume as much battery overall.”