Print from the iPad, iPhone, or iPod Touch with Apple’s Airprint

Apple announced that its releasing a beta version of Airprint wireless printing for iPad, iPhone, and iPod Touch as part of the iOS Develope Program. The service will be included in the iOS 4.2 software update in November.

What AirPrint does, is automatically find printers on local networks and print text, photos and graphics to them wirelessly over Wi-Fi. There is no need to install drivers or download software. 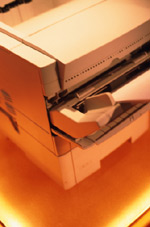 "AirPrint is Apple’s powerful new printing architecture that matches the simplicity of iOS—no set up, no configuration, no printer drivers and no software to download," said Philip Schiller, Apple’s SVP of Worldwide Product Marketing. "iPad, iPhone and iPod touch users can simply tap to print their documents or photos wirelessly to an HP ePrint printer or to a printer shared on a Mac or PC."

"We’re pleased to work with Apple to bring Apple’s AirPrint to our fall lineup of ePrint printers in time for the holiday shopping season," said Vyomesh Joshi, HP executive VP, Imaging and Printing Group. "Making it easy for our customers to print anytime, anywhere, is a key priority for HP. iPad, iPhone and iPod touch customers are going to love how easy it is to print using our new range of ePrint printers, creating high-quality printed pages in an instant."

Apple says Airprint will support a wide range of inkjet and laser printers. iOS 4.2 devices can print to printers shared through Macs or PCs.

Google has a similar offering called CloudPrint, but it’s not yet available. It will be supported by web apps, Android apps, iPhone apps, Chrome OS, etc. – "any type of application" Google says.

Google Android Closes In On Apple