William Shatner is due a raise, a bonus, or both.  This afternoon, Priceline – which has wisely used Shatner as its spokesman for years – posted its third-quarter earnings report, and it seems the company has lots more money to spread around than analysts expected.

For starters, Priceline managed to report revenue of $1.0 billion.  Analysts thought it would report revenue more in the neighborhood of $973.6 million.  Then another key win for the organization came in terms of earnings per share, as Priceline was able to report $5.33 per share instead of $4.97 per share.

What’s more, these successes don’t look like they’ll amount to a one-time event.  Priceline thinks it’ll be able to report between $710 million and $747 million in revenue for the fourth quarter, compared to the $689.4 million analysts thought they might see.  And EPS should amount to between $2.91 and $3.06 rather than $2.68. 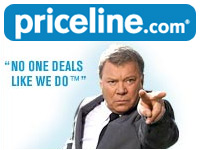 Anyway, Priceline’s stock is now up 5.64 percent in after-hours trading, and Priceline President and CEO Jeffery H. Boyd said in a statement, "We are pleased by the Group’s strong performance in the 3rd quarter.  Increased gross travel bookings were driven primarily by our worldwide hotel business, which had a 54% increase in room nights booked."

Finally, for anyone who’s interested in the travel industry in general, we’ll note that Boyd’s also been quoted speaking in support of the Google-ITA Software deal.

Keep it Here for Live Coverage of PubCon This Week