A couple of important questions regarding Chirp – AKA the first Official Twitter Developer Conference – have finally been answered.  Would-be attendees now know which dates to be in San Francisco (April 14th and 15th) and how much money they’ll have to spend ($469).

These facts were posted on the official Chirp homepage today, and the first 100 tickets (out of a total of 800) were released, too.  Interest seems to be high so far. 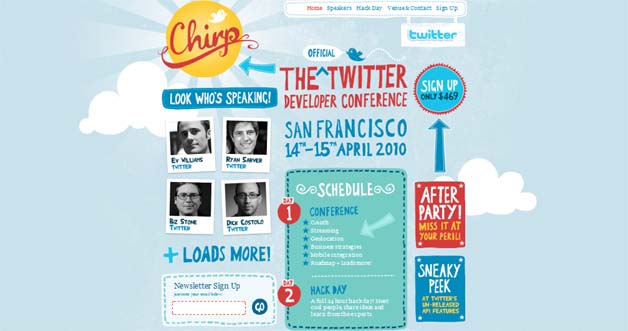 Of course, a lot of details remain unannounced.  For example: the only speakers to have been revealed so far are Dick Costolo, Ryan Sarver, Biz Stone, and Ev Williams – Twitter employees, all.  So whether anyone else is going to be brought in or the company just intends to parade its own people across a stage is hard to say.

Also, although an after-party’s scheduled, Twitter’s just said it’ll involve "free beer, food and music," and since tickets cost $469 each, it matters quite a lot whether that covers Bud Light, bad tacos, and disco, or Belgian ale, gourmet burgers, and a live performance by Radiohead.