Although the wait is not quite over, we now have a clearer picture as to what JK Rowling’s new Pottermore site is going to look like.

The plans for the site were announced via online scavenger hunt last week, and when visited, the site announced “Coming Soon” and linked to a countdown on YouTube. Today, JK Rowling has released the YouTube video detailing what to expect from the new site.

“I’d like to take this opportunity to thank you,” Rowling says in her YouTube announcement. “Because no author could have asked for a more wonderful, diverse and loyal readership.” And considering the buzz surrounding this new site and the upcoming film conclusion of the series, I would say she’s spot on.

Rowling says Pottermore will be an “online reading experience like no other.”

Part of the site will be a Harry Potter store where fans can purchase, among other things, audiobooks and for the first time ever eBooks of the series.

“Pottermore will be be built by you, the reader…Pottermore will be the place where fans of any age can share, participate in and rediscover the stories,” Rowling says. This hints at some sort of social network layer to the experience, possibly even user-generated content. 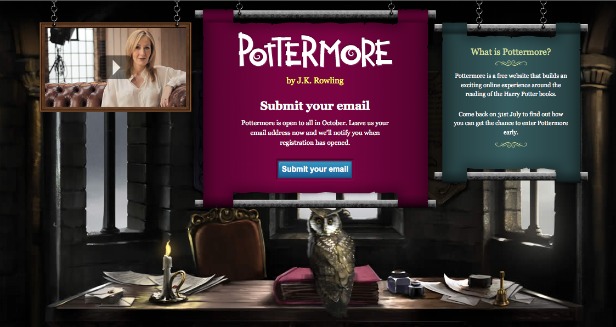 Possibly the most exciting part of the new site will be the new content from Rowling herself. She says that she has been “hoarding” information about the world of Harry Potter for years, and the site will be the place where it will be revealed. It doesn’t look like this information will be any new adventures for Harry Potter but rather an expansion of the world. Possibly encyclopedic in nature? Backstories? We will have to wait to find out.

It’s been reported than Rowling has written over 18,000 words of new Harry Potter material for the site.

Pottermore will be open to everyone in October, but a select few (1 million) users will be chosen to “help shape” the experience of the site on July 31st (Harry Potter and Rowling’s birthday). You can sign up to receive email notifications on the site.

How OpenFeint Hopes to Change the Mobile Gaming Industry