It appears that Twitter may have a significant redesign in the works. It has been discovered that Twitter’s Creative Director, Doug Bowman has posted a partial screenshot.

Bowman’s exact comment on the screenshot is, "Working on what may end up a significant redesign. Not final yet. What we can show without giving away the farm." 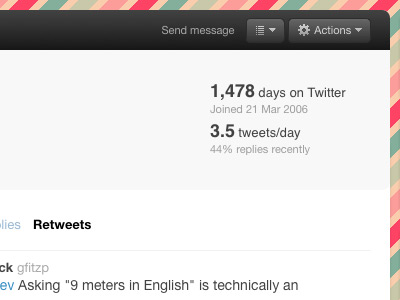 Comments on this screenshot are so far overwhelmingly positive, which is a pretty rare thing for a redesign of a major social network. Here are a few of them:

Andrew Cornett: Looks amazing, can’t wait to take her for a spin.

Obviously it’s incredibly premature to call the redesign that hasn’t even happened yet a hit with users. By the time it comes out, it could look entirely different, and unleashing a redesign on the entire community is a lot different than a fraction of that community seeing an incomplete screenshot. And Twitter users have been just as critical of change as Facebook users.

That’s ok though. It comes with the territory. Something tells me users will be much more concerned with the "farm" part of things, which Bowman seems to imply will be the bigger deal. Either way, it’s always a good sign when the response starts positive. Of course, a significant part of the Twitter community rarely uses the web interface anyway.

Twitter’s Developer Conference, Chirp takes place next week. There is a distinct possibility that some major announcement(s) will be made there (everyone’s still waiting for that ad platform), but we’ll see.

What do you think of the possible redesign? Share your thoughts.