PleaseRobMe Hits Foursquare Users with a Dose of Reality

Update: Fousquare has issued a respons to the attention PleaseRobMe has brought to potential privacy issues associated with location sharing. What it boils down to is that Foursquare "takes privacy seriously" and it’s "really a bigger question about the pros and cons of location sharing in general". Read the company’s entire response here.

Original Article: Yesterday at about 2pm PleaseRobMe went live. PleaseRobMe is a site set up by a few developers who want to spread awareness about how easy it would be for people to rob your home if you share too much information about yourself online, specifically your location…even more specifically through Foursquare. The site displays a list of messages asking people if they know the whole world has access to their location. All of these are drawn directly from the PleaseRobMe Twitter account.

We asked Boy Van Amstel, one of those developers if they were concerned that followers of PleaseRobMe’s Twitter account could actually be interested in robbing people. Van Amstel responded, "With just the information [from] pleaserobme.com it would be almost impossible to do so. However as people share more information about themselves, such as their home address, it might become a possibility. We think it’s important to think about that and what it means if you share location information on services like Twitter…it’s very easy to get it, even directly from Twitter’s search page." 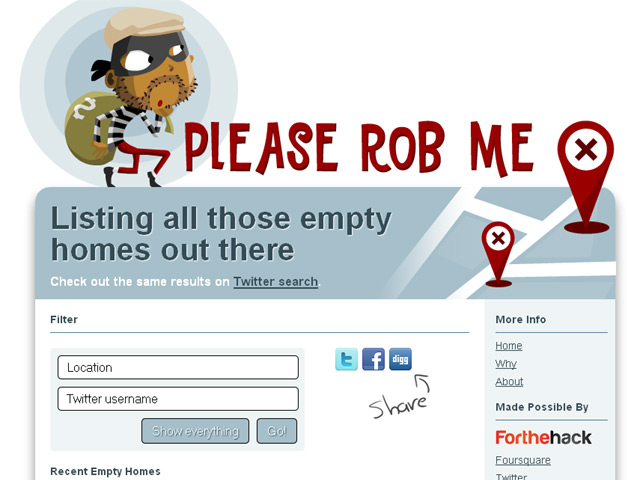 So far, Van Amstel says Foursquare is the only service it watches to determine who is sharing their location with the world. "It’s not about the service, it’s about the information that’s being shared. We think it’s important to realize that something you post on Twitter isn’t necessarily private. Everybody is able to read it, unless you protect your messages."

One can only assume that FourSquare isn’t entirely pleased with the launch of PleaseRobMe. That’s the second time the service has had a not-so-positive light cast upon it this week. Earlier in the week, there were reports of Foursquare cheating. This could have an effect on the decisions of businesses to give Foursquare users special offers, a practice that is becoming more commonplace.

Regardless, PleaseRobMe bluntly delivers an important reminder to socially active people that just because they’re using the “virtual” world, that doesn’t mean it can’t potentially have real-world consequences.