UPDATE: Well that was quick.

Within 5-10 minutes of this article being posted, the videos in question have been taken down by YouTube:

Here’s another (grainy) screencap from one of the videos, entitled “Slam Dunk.” 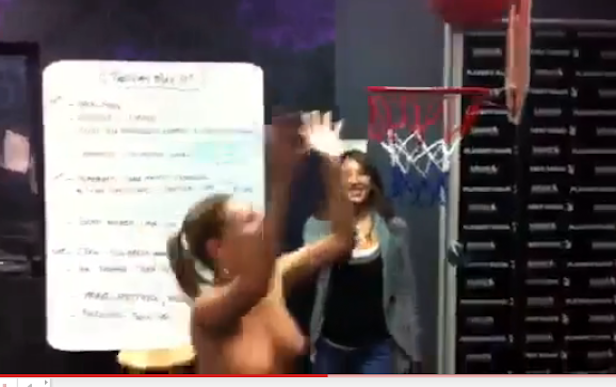 YouTube consistently takes down content that it deems inappropriate for various reasons. They outline specific guidelines in their Terms of Service that give them the right to remove content at their sole discretion. They also have a Community Guidelines page that gives tips about certain types of content and explains whether or not it qualifies as acceptable material to be showcased on the site.

It’s common knowledge that YouTube frowns upon nudity. Right? Point number one on the community guidelines page says this:

We all know that real pornography and most all nudity is not allowed on the site. Any video claiming to feature “Hot Hot Sex” or “Blake Lively Nude” will always be a joke and/or spammy video filled with links to other websites.

So why does Playboy’s Morning Show Channel have clips of topless girls playing basketball?

Playboy’s Morning Show is broadcast on Sirius satellite radio and as would be expected, often times features mature content. Now, nudity doesn’t bother me in any way, shape or form. And I’m certainly no spoilsport. But I have to wonder why these videos are allowed to be on YouTube?

Looking deeper at the community guideline tips, you find a specific section on “Sex and Nudity.” Let’s take a look:

Most nudity is not allowed, particularly if it is in a sexual context. Generally if a video is intended to be sexually provocative, it is less likely to be acceptable for YouTube. There are exceptions for some educational, documentary, scientific, and artistic content, but only if that is the sole purpose of the video and it is not gratuitously graphic. For example, a documentary on breast cancer would be appropriate, but posting clips out of context from the documentary might not be.

Ok, there are exceptions. That’s why there are tons of how-to breast exam videos on the site. Understandable. Let’s see if the “Machine Gun Titays” or “Slam Dunk” videos fall into any of these exception categories. Educational? Not really. Documentary? Like National Geographic? Scientific? Probably not, this picture is kind of grainy. Artistic? I guess the argument could be made, but c’mon.

Another point about these videos – they are accessible without signing in, therefore bypassing the “mature content warning” that YouTube places on some questionable videos. (Note, this video pictured below that requires a sign in contains no nudity, but some definite near-nudity)

Of course, kids can lie about their age and say they are 18 – that’s not news. So YouTube’s sign-in safeguard isn’t going to prevent most young kids from watching mature content if they really want to do so. But it is strange that the two Playboy show videos in question can be accessed without said log-in. The Playboy Morning Show’s Twitter account even tweeted a link to the video, which naturally doesn’t require a log-in:

And it’s not like these videos were posted minutes ago and YouTube simply hasn’t had time to react. The two videos in question were posted 2 and 5 days ago, respectively.

Let me reiterate how not upset I am about nudity on YouTube – not in the slightest. I’m just saying that if I put a video of my girlfriend playing naked basketball on the site, it probably wouldn’t last 5 days. What gives?

Recently, YouTube came under fire for banning a video from the group Mercy for Animals that shows hidden camera footage of workers at a slaughterhouse mistreating calves. It’s some brutal stuff. They eventually reinstated the video. YouTube does have a specific policy on shocking and disturbing videos, even making reference of slaughter houses:

If a video is particularly graphic or disturbing, it should be balanced with additional context and information. For instance, including a clip from a slaughter house in a video on factory farming may be appropriate. However, stringing together unrelated and gruesome clips of animals being slaughtered in a video may be considered gratuitous if its purpose is to shock rather than illustrate

Maybe YouTube hasn’t noticed the Playboy videos yet. Maybe they have and believe it falls under one of their nudity exception rules. Either way, the common knowledge that stuff like that isn’t allowed on YouTube looks busted as of right now.

News Corp. Will Know in 2 Weeks If It's Going to Sell MySpace