At some point in time, questioning where Facebook’s users are located may cease to make sense; it could be almost the same as asking where people are located.  For now, however, not every Internet user in every country is a member, and so Pingdom took a look at exactly how the spread breaks down.

Unsurprisingly, the majority of Facebook users live in the social network’s home country, and those 130 million or so individuals work out to about 41.9 percent of the U.S. population.  The U.K.’s 28 million users, meanwhile, represent about 45.1 percent of the people living there. 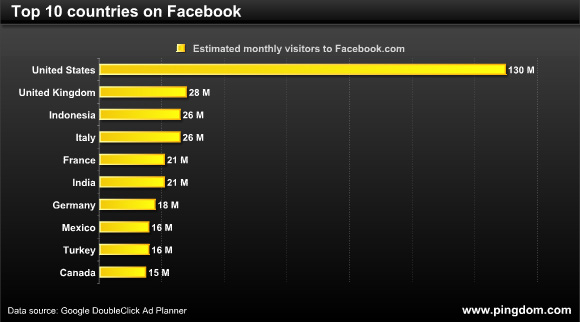 None of the other percentages are quite as impressive.  France (39.7 percent) and Canada (43.9 percent) are the only countries inhabited by people who are similarly obsessed with Facebook.

Still, looked at another way, that fact means Facebook’s growth won’t be limited by the planet’s population anytime soon.

Pingdom’s blog post tended towards that interpretation of the situation, concluding, "Facebook’s international expansion is well under way, and it’s arguably the largest and most wide-spread social network that ever existed.  As Facebook grows on a global level, the current US dominance of the social network will gradually diminish and become more similar to the general distribution of Internet users."

That will leave Google in a very difficult situation if and when it gets around to launching a rival social network.

iPhone and iPad Apps About To Get More Integrated with Facebook