Phishing gangs have been increasing their tactics against brands, social networks, online  classifieds and online gaming, according to a new report from the Anti-Phishing Working Group (APWG).

The report found attacks focusing on brands in online retail, auction and financial services categories decreased while payment services increased more than 10 percent in the first quarter of 2010. The category of “other” – social networking, online classifieds and online gaming industries – rose to an 18 percent proportion, however, from 13 percent in Q4 2009, an increase of more than 37 percent quarter over quarter. 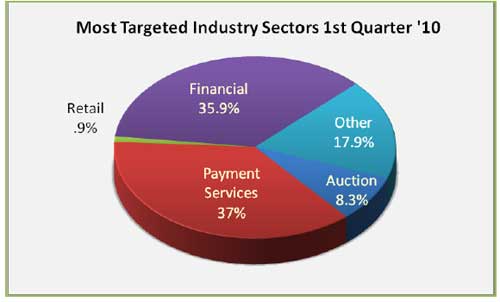 "The increase in the ‘Other’ category is attributed to the sharp increase in attacks against the online classifieds, social networking and gaming industries,” said Ihab Shraim, chief security officer and vice president, network and system engineering at MarkMonitor and APWG Trends Report contributing analyst.

*The United States continued its position as the top country hosting phishing sites during the first quarter of 2010.

“Less visible statistically but as potent is the increasing focus on direct attacks against executives with corporate treasury authority. Losses from the latter, according to reports received by the APWG, can and do regularly run into six figures now.”

Bing for Mobile for BlackBerry Gets Update