Alright, I know that people care about other aspects of this year’s final major other than Tiger Tiger Woods, ya’ll – but you have to admit that he is once again dominating the media coverage.

Not to say that’s any different from any other tournament where he is a contender, but it seems like there are multiple story-lines involving Tiger this morning as we kick off the 2011 PGA Championship (or as Jim Nantz would say, Glory’s Last Shot).

Can he get back on track on his way to catch Jack Nicklaus in total majors? How does his game look coming off surgery? Why is he sort-of wearing red on a Thursday? And of course we have that whole Steve Williams thing.

For the latest on Tiger, Phil, Rory, and everyone else, the PGA gives you the official PGA Championship app for iOS. 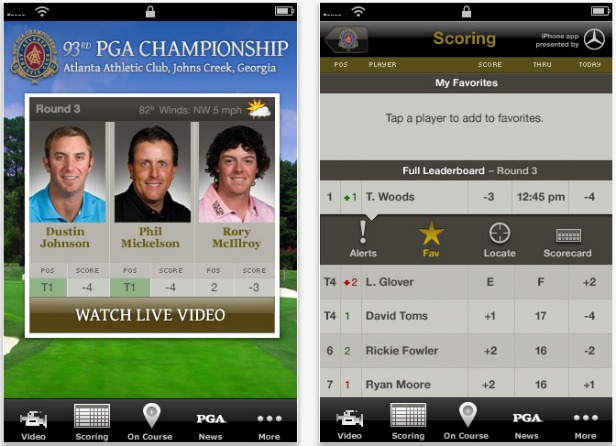 Live Marquee Group Video, Push Alerts, Live Leaderboard, Player Scorecards and more, will keep you following Glory’s Last Shot, while you are at the course, on the go, or as a supplement to broadcast coverage. Par 3 Live video coverage will feature nearly every player in the Championship at The Atlanta Athletic Club for all four rounds. Plus, watch daily highlights of the on course action.

So you get live streaming video of selected groups as well as static coverage of the par 3’s where you can watch all the players come through one-by-one. You can also enable personalized alerts that notify you when specific players start and end round, when they make a specific score like a birdie or a double bogey, or you can set the notifications to alert you to any score made by a specific player.

The app is optimized for the iPhone 4 but is also available on the iPad.

More on the PGA Championship, including where to watch it online, is available here.

Hungry Children Being Fed Thanks To StumbleUpon Users