Animal rights activists are using a highly controversial Android app to get out their message.

Apparently, opponents of the “Dog Wars” app have modified an older version of the app to include a specific trojan code. The malware, which Symantec is identifying as “Android.Dogowar,” is only planted in Beta version 0.981. That older version hasn’t been found on the official Android Market but has been found on various warez sites.

Dog Wars has received a lot of criticism since developer Kage Games put it on the market earlier this year. The app, which allows you to “raise your dog to beat the best,” was not pulled by Google despite numerous petitions asking the company to do so.

According to Symantec, here’s how the modified app looks-

Agreement by the user to grant the permissions requested by the app (which will include SMS permission) will allow for the the app to be installed. Upon installation, the display icon of the legitimate app looks almost identical to that of the app that has been bundled with the Trojan (on devices with a screen size of 3 – 3.5 inches). In fact, they looked so similar, we almost failed to spot this one difference several times; but closer inspection into the icon of the app containing the Trojan revealed that it actually says ‘PETA’ rather than ‘BETA’ in the app icon. 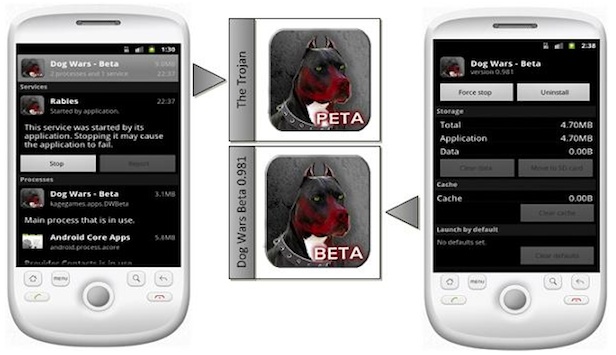 Internally the Trojan code has been injected as a package called ‘Dogbite’. Once a compromised device starts up, a service called ‘Rabies’ is initiated in the background, which carries out the core functionality of the app.

What is the core functionality of the modified app? First, it sends a text message to everyone on the user’s contact list that reads “I take pleasure in hurting small animals, just thought you should know that.” Then, it send a text message to “73822,” which signs the user up for a PETA text-alert service.

A PETA rep told CNET that “We don’t know who created this version of the app, but we think it is ingenious. When someone creates a game that glorifies animal abuse, you can bet that people will come up with clever, smart ways to take action against it.”

The makers, Kage Games, have said in the past that they are “in fact animal lovers ourselves,”

This is our groundbreaking way to raise money/awareness to aid REAL dogs in need, execute freedom of expression, and serve as a demonstration to the competing platform that will not allow us as developers to release software without prejudgment

Bing is the Future of Your Living Room (According to Microsoft)