PepsiCo is introducing a prototype for a fully interactive new vending machine at the National Automatic Merchandising Association’s One Show in Chicago this week.  It is called the “Social Vending System” and I gotta say, it looks pretty awesome.

The new vending machine will contain a large touch screen from which thirsty travelers can purchase a soda (yes, soda… not pop or soft drink or cola).

But the neat part is the “social” part.  Users will have the option to send and receive gifted sodas at the machine.  Say you want to get your friend back for buying you a mountain dew when you were parched at the concert and you only had credit cards and they only accepted cash (an absolutely plausible scenario).  You can buy them a soda at the digital vending machine.  Just enter their name and mobile phone number as well as a text message and they will receive the message along with a code to redeem their pre-purchased beverage. 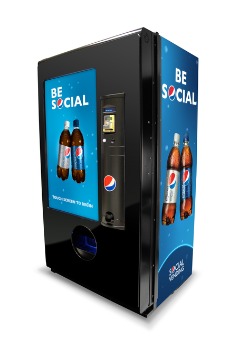 You can also record a 10-second video message to send to the lucky recipient.  Pepsi calls these “random acts of refreshment.”  The idea is awesome but work on that tagline part, what do you say PepsiCo?

“Our vision is to use innovative technology to empower consumers and create new ways for them to engage with our brands, their social networks and each other at the point of purchase,” said Mikel Durham, Chief Innovation Officer at PepsiCo Foodservice. “Social Vending extends our consumers’ social networks beyond the confines of their own devices and transforms a static, transaction-oriented experience into something fun and exciting they’ll want to return to, again and again.”

So about that social network part, one omission from the demo video is Facebook and Twitter integration.  If this crucial part is added, this “social vending” idea could really take off.  It sounds like that social network integration may be the next step as Pepsi says, “Further development of the Social Vending System platform is ongoing, and PepsiCo anticipates testing the concept with key strategic partners later this year.”

I would love to be gifted a Mountain Dew and a bag of Cheetos in the future.  Would probably make my day.  How bout you?