PayPal has announced the launch of version 2 of its Android app. This feature "bump" technology, which lets two users bump their phones together to send money (much like the existing iPhone app).

"Split the check is another great feature, which lets you automatically calculate the total cost of a bill and then collect money directly from friends when out to dinner," says PayPal Mobile Senior Director Laura Chambers. "We hope these new features make it even easier to get paid back on the spot the next time you’re stuck picking up the tab."

"According to a recent Nielsen Company report, by the end of next year, more people will own smartphones than 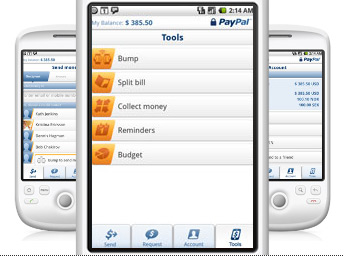 any other phone in the U.S., and that’s sure to drive people to use their phones to pay," adds Chambers. "We’ve definitely seen this growth ourselves. While we’ve had PayPal mobile applications since 2005, in the last few years we’ve seen usage soar. Over the last six months alone, PayPal generated nearly twice the mobile payment volume it did in all of 2009, and we expect to close out the year with over a half a billion dollars of mobile payment volume."

Android use itself is growing dramatically. A report from NPD Group found that one in three smartphones shipped in the U.S. are running Android.

The new PayPal app is free, and can be found in the Android Market.

Lollapalooza Turns to Facebook Via Mobile Apps to Connect Fans